I joined the Navy at age seventeen near the end of World War II. I enlisted as a seaman second class in the aircrew program and went through boot training at Memphis Tennes­see. After boots I remained in Memphis at radioman training school. During radio school I was sent to V-5 and entered South East Mis­souri State Teachers College in Cape Girardeau, Mo.

Following shifts to Oberlin College and Marquette University, I was ordered to NAS Los Alamitos, California for selective flight training. We soloed in the N2S after seven or eight flight hours.

Pre-flight followed at Ottumwa, Iowa, where we arrived on January 1, 1947. Iowa is cold in the winter. A lieutenant we called "Mighty Mouse" attempted to keep us in line. He was a dour man. I made liberty twice in four months due to various gaffs and many de­merits.

Primary training followed at NAS Corpus Christi and surrounding airfields. NAS Pensacola and nearby airfields hosted basic training. By then the SNJ was an old friend. Following carrier qualification (straight deck) it was back to Corpus for advanced training in PBMs: boats. After award of Navy Wings in August of 1948, I was sent as a Midshipman to Navy North Island, San Diego, to join VP-43, a PBM squadron.

My wife Evie and I were married in December 1948 in San Diego. My skipper gave me Monday off. The honeymoon was short. The marriage has lasted. I was commissioned Ensign on January 9, 1949. VP-43 was decommissioned shortly after and I was sent to VP-42, also boats. We went to WesPac in March. The deployment lasted until January 1950. After returning, it be­came clear I would leave the service in June 1950.

Plans were changed due to circum­stances in Korea. We went to Japan in July 1950 and spent ten or eleven months doing a number of day and night patrols, shooting mines, carry­ing UDT teams here and there, etc. Upon getting back to the States we received orders to NAAS Chincoteague in November 1951, where I was assigned as Flight Control Officer. The air con­trol guys in the tower took many orders for oys­ters (code word "units") and I passed the orders to the shucking house in town. Unfortunately, I was not working on commission. The "units" were picked up by aviators (and others) getting their monthly four hours of flight time. The line crew delivered the "units" to the airplanes, picked up the medium of exchange, passed it on to me, and I passed it to the lady who ran the shucking house. This was capitalism at work, except the middleman was a volunteer.

After two years in the oyster business, dodging hurricanes and participating in search and rescue, we returned to Coronado to join VR-32 at Navy North Island. VR-32 was a ferry squadron and we flew whatever the Navy had in the air­craft inventory wherever they wanted us to go.

Soon I was qualified in twenty-six airplanes. There were many similarities in certain classes of airplanes. We closely stud­ied the red pages [the ‘emergency section’] in the manuals.

I was separated in May 1956. I started engineering school at San Diego State in July. We found a house; I worked part time and studied a lot. I received a BSEE in June 1959 and found work involving guidance sys­tems in the Mercury, Gemini and Apollo pro­grams. It was fast paced. In 1968, for various reasons, I entered law school at Santa Clara University (my mid-life crises). I touched my limits during the next three years.

Upon graduation in 1971, I passed the California and Patent bars and have worked as a patent attorney since, although not full time since 1989. Evie and I have taken it easy since 1989, spending several months traveling in Eu­rope and seeing the U.S. and Canada in our motor home. We intend to do more of the same as long as our energies hold out. We try to sneak in a golf game now and again as well.

My original statement that I had 26 aircraft on my card was in error--"The older the man, the higher the boy jumped."

That does it. I was lucky to find my oId qual card. Best Regards, Hank Stanley.

“It Was a North Korean Cablegram” 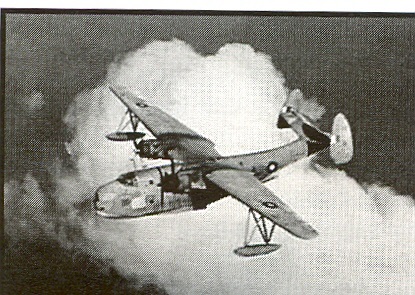 The Southwest coast of the Korean Peninsula is dotted with many islands, some small and some large. In the early days of the "police action", when the good guys were holed up at Pusan, our job was to detect small boats among the islands and along the coast, which were supplying the North Koreans at the front. They moved stuff at night because they were hit by Air Force and Navy planes during the day. We had good radar in the PBMs. I think it was APS-15, but my memory is subject to fading at this point. We could pick up small boats and plot their positions. Folks with more firepower could then go in and get them.

We were on patrol on a particularly black night when our radar picked up some supply boats. Being fighter pilots at heart, we flew low between two of those rocks to confirm our targets. Unfortunately, the bad guys had stretched a cable between the islands. We heard a loud noise and immediately lost our communications equipment and basic flight instruments. Appar­ently we had cut the cable with our propellers and in so doing it had whipped around wiping out all of our antennas and our pitot tube. It also took a chunk out of one of our vertical stabilizers.

No problem. Fast planes lose major parts. Slow lumbering planes hardly feel it. Anyway, we still had our needle/ball. Back to Iwakuni. No rate-of-climb, which we normally used for gradual decent to a water landing. The lights at the seadrome were blacked out, but the "runway" was miles long so we eased her down and chalked it up to another uneventful day.