I did get to last year's reunion, but sorry that a solid previous commitment precludes my attending this year. One of the great regrets in this is that I won't see my oid buddy, Bill Busse, whom I haven't seen since the '50's.

I'll sort of follow your guide­line for the career summary.

The join-up? The war was on and I was about to graduate from high school in 1945. A Navy aviation flight crew recruiter made a pre­sentation at school, and I thought it looked more desirable to be riding in the turret of a TBM than getting drafted into the Army. So I put my name in the pot.

Went to Chicago to get enlisted, and the big honcho, (I still remember his name was Lt. Mosier) came out before the gathered recruits to tell us that pilot training had just opened up and that we could take the test for that instead, if we wanted to, or come back later for aircrew sign-up. Most of us volunteered to take the writ­ten pilot test then and there and about one third of the group passed, myself included. Hence the unexpected start to a Navy pilot career.

V-5 college was the University of the South at Sewanee, Tennessee, then the Univer­sity of Louisville. Selective [flight training] at Los Alamitos and Pre-flight at Ottumwa. My most memorable occurrence at Pre-flight was when the judo in­structor used me to demonstrate a move designed to break the arm of an aggressor and he broke my arm.

That put me back three weeks in graduation, from the first choice group to the last choice, resulting in my not getting my desired fighter training, but going to multi-engine PV-2's. It took me a tour in utility and two years instruct­ing at Pensacola before I wangled myself into jet night fighters. Stayed in fighters.

Met my wife-to-be, a Scottish nurse at the British-American Hospital in Nice, while in the Med on the Independence (CVL-22). That was 40 long years ago.

Retired from the Navy at the end of 1966 and immediately went to work for World Airways in Oakland. 21 great years with them, the last 10 as DC-10 captain.

Got kicked out of that job when I reached the mandatory retirement age of 60, sold cars for a while, moved to my present home in Olympia, Washington in 1991, and am fully re­tired now, with no notable activities other than the computer, yard work, and trying to keep in shape with workouts at the health club and bike riding.

You ask about favorite song. Who cares?

How about, "When It's Apple Blossom Time in Orange, New Jersey, We'll Make A Peach Of A Pair"?

And Bill Busse, I'll never forget those great Argyle socks you knitted [for] me at Saufley. 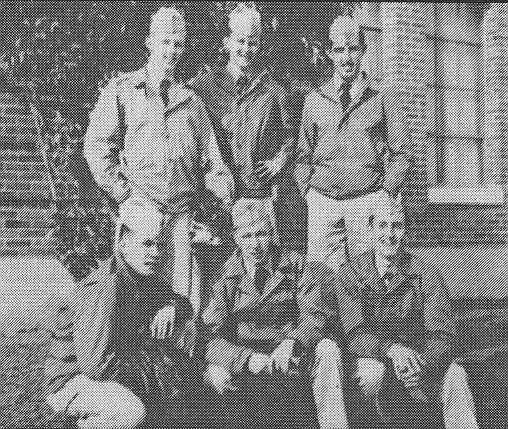