Reflections of an Aging Mariner 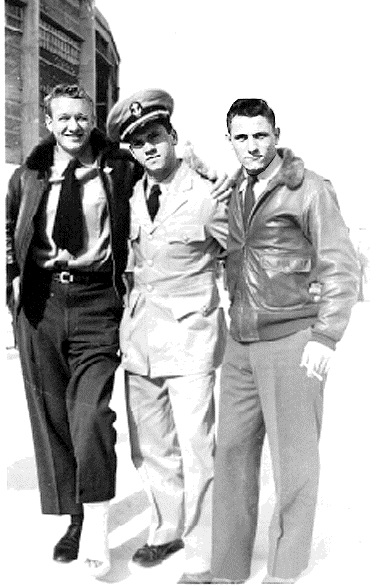 Looking back fifty years I have wondered how a group known as flying midshipmen came together in the first place. Clearly some could hardly wait to join the Navy, while others needed a draft to blow them in. A few were so taken with aviation that they were building model airplanes since romper days. Others could not tell an aileron from an elevator until it was covered in pre-flight. Some-thing they did seem to have in common was their willingness to serve their country when called and a spirit of adventure for this thing called flying.

Vic Manafee (12-47), Bud Goehring, and unknown Mexico City 1947. “Too crippled to play but just right to travel. Anything to get out of battalion sports and military drill.”

“All three of us were on the binnacle list for various injuries sustained while playing for the ‘Pensacola Goslings’ football team. The picture was taken outside the bull fighting (I use the term loosely since the poor bulls never have a chance) stadium sometime after the game with the University of Mexico.”

The year was 1945 for the writer and like most youngsters app-roaching their eighteenth birth-days, I was somewhat unsettled in my career objectives. Simply stated, long term goals were pretty much ignored. The immediate demanded my attention. How was I to get passing grades as a freshman at N. C. State and how could I walk without limping? Three of us living in the fieldhouse received our conscription letters in the same mail. Together we proceeded to the Raleigh post office to review our options. There really were not very many.

There were lots of veterans prowling the campus in those days and all had war stories to tell and advice to give. We listened intently as each told his story, the moral of which was never volunteer and never ever go into the Army. Occasion-ally a marine would have our ear and, while the horror stories were even more graphic, there was only one place to serve and that was in the U. S. Marine Corps. Instinctively I had trouble reconciling the logic of their thinking. So, by the time I reached to post office, I was red meat for the Navy recruiter.

Sign here, fly later and I was launched on the greatest adventure of my life. Now it was common knowledge that a few found a home in the Navy from the start. Indeed some of the Navy juniors among us had eighteen years of naval tradition and customs before their swearing in ceremony. Preferential treatment? Not a bit! In fact, some of us might not have made it through pre-flight were it not for their help with coping skills when dealing with our Marine Corps handlers.

But not everyone took to aviation and some opted to drop out of the training. Recall, if you will, the late '40s, where our first commander-in-chief, “Give em hell” Harry Truman, pushing the Marshall Plan, calling the Russian bluff in Berlin, and fighting strikes on the home front. Understandably, there were not many dollars going to naval aviation in those days and in the backwaters of Pensacola, Jacksonville, and Corpus Christi enthusiasm had started to wane. It was no wonder that some of us said “no thanks” to the seemingly endless bad weather and flight pools. Even the runways were coming apart at Cabaniss Field. The young and the restless were never known for their patience and the Navy began to lose some talented people.

But flight training did continue for most of us and for those who persevered, wings of gold almost became an obsession. Having no natural penchant for aeronautical matters, it took me a full two years of training before being designated a naval aviator. Thus I was deprived of the bragging rights that many flying midshipmen enjoy to this day. Specifically, the distinction of wearing wings on your chest and fouled anchors as collar devices. Can you imagine the rush it must have been to swagger up to the Breezy Point “O” Club bar and order up with the junior officer crowd! Suddenly you are one of them; and yet you're really not. What an anomaly!

My hat, of course, is tipped to that special group of midshipmen who actually deployed as peons and flew as real pilots, some of whom may have been combat tested in Korea. Eventually, of course, we all found our place and the magic of the training years were a thing of the past. Now reunions seem to resurrect those happier days. We find now that the “working years” have treated most of us well. Nowhere was this more evident than at a recent reunion of Pre-flight Class 13-47. It was an eye-opener to learn what this group of nineteen year old apprentice aviators did with their lives. As expected, the flying stories were breathtaking, stretched a bit with each retelling. But sometimes even more interesting were the stories told by the architects, the salesmen, the teachers, the surveyors, the engineers, the airline pilots, the realtors, and the plain old garden variety business men. I have to salute all of them and particularly the U. S. Navy for making these adventurous things happen for us. We are indeed a fortunate breed, and I, for one, would like nothing better than to do it all over again.