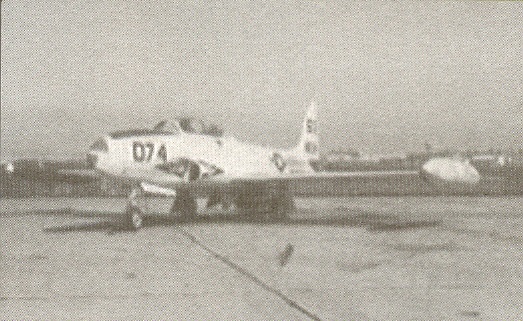 In December 1951, our squadron, FAWTULANT, received an F-80, Shooting Star. We were flying F6F Hellcats and F4U Corsairs, and the F -80 was our introduction to Jet Powered aircraft.

At an all-pilots meeting we received a briefing on how to manage the fuel system, looked at a few pictures of a jet engine and were told that a pilot's handbook was available in the Operations Office. We could fly the F -80 when we had read the handbook.

On the morning of January 8, 1952, I went to the Operations Office, checked out the handbook for the F -80, went out to the flight line and climbed into the cockpit. I spent about 45 minutes checking out where all the controls were and reviewing in my mind how to manage the fuel transfer system. Our maintenance department had removed the wing tip fuel tanks so it would be easier for us pilots on our first familiarization flights. With the help of the plane captain, I started the engine. Everything looked good, so I put on my helmet, had the plane captain pull the wheel chocks, and called the Control Tower for taxi clearance. I proceeded to the duty runway, called for take­off clearance, and took off.

The first thing I noticed after I retracted the landing gear and wing flaps was that the F -80 did not climb very well. I was climbing with an indicated airspeed of140 Knots, the same as we did with the F6F. (Climb speed for a jet should be in excess of 220 Knots). The next thing I noticed was that the fuel gage showed that I was burning fuel at a high rate, telling me that I had better start planning to land. I climbed to 10,000 feet and practiced a few landing approaches on a cloud. By this time I had been in the air about 45 minutes and my fuel state was low, but I was only about 5 miles from my home base, NAS Boca Chica, Key West, Florida. I called the Control Tower and was given clearance to land. Approaching the field, I set myself up for the normal 360-degree landing pattern. I entered the break at 1000 feet, made a tight left turn, pulled the throttle to idle, dropped the wheels and completed a 180-degree turn maintaining 1000 feet altitude. At the runway abeam position, I lowered the wing flaps and commenced a 180-degree descending turn to the runway heading and the field elevation.

After I lowered the wing flaps, I added power to slow my rate of decent. Half way through my turn to the final runway heading, at about 90 degrees from the final approach heading, my rate of decent was more than I expected. A quick look at the engine RPM revealed less than 70% and increasing very slowly. I pushed the throttle all the way forward, but the RPM still increased very slowly. (Only later did I learn that a J33 engine takes a full 11 seconds to accelerate from idle to 100% power).

By this time I was approaching the end of the runway. My engine RPM had increased to 85% and was increasing much faster than before, but I knew I was going to hit the ground short of the runway. My immediate thought was wondering how I could ever explain to the Ops Officer why I crashed the only Jet in the squadron.

Fortunately, the runway had a long approach that was relatively level, so I leveled my wings heading about 20 degrees off the runway heading, hit the runway approach surface with the main landing gear and bounced about 10 feet into the air just as the engine finally reached 100%. I was airborne with flying speed!

I turned to parallel the runway and called the tower for clearance to make another landing. Clearance given, I climbed to 1000 feet, turned downwind and made another landing approach. This time I did NOT reduce the engine RPM below 85%. After landing, I taxied to my squadron ramp, parked, cut the engine and climbed out of the F-80. I inspected the main gear and underside of the aircraft for damage. What a relief, no signs of any damage. (By the way, the squadron representative in the tower gave me credit for two landings).