In the spring of 1948, I was still an Aviation Midshipman assigned to Fighter Squadron 1L at NAS Atlantic City, NJ; ‘L’ was for light carrier air group. Besides flying, I was the Education Officer for our enlisted personnel. In the process, I came up with some ideas for training and testing with some of our enlisted ratings. My boss, the Personnel Officer, liked my ideas and the Squadron Skipper flipped over them. 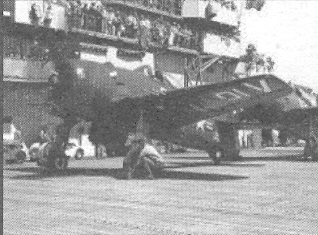 The CO made an appointment for me to visit the staff of Commander, Atlantic Fleet in Norfolk and explain my ideas. I was a little surprised at all this but when it came time I packed my gear and flew my little F8F-1 Bearcat to NAS Norfolk. After I landed, parked and checked in with the duty officer I changed into my midshipman uniform and was met by two WAVE officers from the staff. We left flight operations and stopped for some lunch. They then drove to the staff headquarters where I gave my presentation. It went over well (I had rehearsed it) and they loved my ideas.

The WAVES drove me back to flight operations and dropped me off. It was after 1600 when I arrived and there was a different officer on duty. I filled out my flight plan and turned it in before I changed into my flight gear. The duty officer looked at the flight plan, looked out the window toward my airplane, looked at me and looked back at my flight plan. Then he said, "No way am I letting you, a lowly midshipman, get in that fighter and fly anywhere. I will have the Line Crew prevent you from touching that aircraft. Now get out of here." I tried to explain things but to no avail. I called up the WAVES again and told them what was going on. They told me to change into my flight gear and they would send a senior officer over to flight operations. They all showed up … giggling a little … and shocked the duty officer when they ordered him to let me go. I flew back to NAS Atlantic City and told the Personnel Officer and the Skipper what had happened. They were pleased that my ideas went over well. Then they just roared!

It was later in 1948 and again I was flying the F8F-1 Bearcat. We had to go aboard the aircraft carrier, USS Saipan (CVL-48) for a few days of flight operations. We landed aboard and got settled in. The other midshipmen and I were assigned to a bunkroom near the officer's quarters for sleeping but they hadn't settled on where we should eat. Finally they told us that we had to eat in the enlisted mess below decks. We went there for lunch and it was very enjoyable and the food was great. However, our Officer-in-Charge convinced the ship's company that we should be eating in the wardroom so we had our next meal with our Officer squadron mates in the wardroom. It was okay but they wouldn't let us go back down below and really enjoy the enlisted mess. 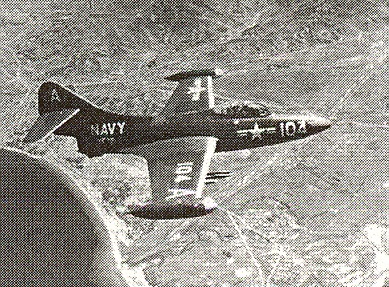 We were on yet another reconnaissance mission in North Korea and toward the end I was hit by enemy fire. A bullet hit the right side of the nose of my F9F-5 where the four 20mm cannon, ammunition and the battery were located. The battery had exploded and damaged the locking ring of the nose cone. The red light came on in the cockpit telling me it was unlocked.

We finished our mission and headed back to the carrier group. I called up our carrier the USS Princeton (CV-37) and told them what had happened and that on landing the nose cone was likely to slide off.

They cleared the deck of aircraft and personnel and I was advised that I would be the first to land aboard. I made a normal approach and landing and when the tailhook caught the wire the nose cone went off the nose rails and slid along the flight deck right up the center line, over the bow and into the water.

I taxied forward to park, but without a nose cone it felt really strange.

We were in the Mediterranean Sea on board the USS Shangri La (CVA-38) in 1964 and were taking part in a NATO exercise. I was in VA-46 leading a flight of eight A4C's with four nuclear weapons delivery targets in Italy. On the way in our fighter escorts deflected the enemy interceptors allowing us to get down close to the water. There was a hefty wind so the water was spraying salt on our windshields. About 50 miles from Italy we split up, hit our four targets, rendezvoused back at sea and stayed low on the water for another 10 miles or so to avoid interceptors. The salt spray got thicker and the windshield wipers were useless.

We climbed to altitude and headed home but I was concerned about landing aboard with our visibility restricted by all that salt. I called up the carrier: "Shangri La (I forget the call sign) this is Whiskey One. Our windshields are caked with salt and I was wondering if you could vector us to a precipitation cell (thunderstorm) to help clean our windshields, over,"

There was a long silence; then "Whiskey One this is Shangri La, please be advised, we don't do windows."

I looked at all the guys in my flight and with their heads nodding under their oxygen masks I could tell they were all laughing like mad. 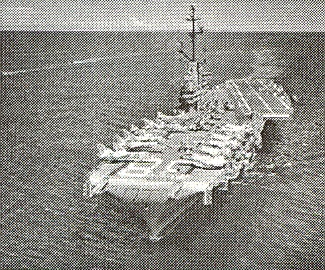 "Whiskey One. This is Shangri La. Vector 085 we have a precip cell about 80 miles east." On the way I was concerned about leading my pack through a T-head. I put them in a tail chase and was going to enter from the east side heading west, but when we got really close to the cell the billowy cloud was beautiful and then pouring rain came down … c1ose to, but outside the T-head. We were all cleaned off and landed safely aboard.

I went down to the Combat Information Center to thank them and explain what we learned about rain outside of a thunder­head, but for some reason the ones that were on duty during my flight were relieved very early by ones who had trouble hiding their giggling.

It was 1960, I was in VA-216 and we were aboard our carrier about 300 miles west of San Diego. My wingman and I were scheduled for a predawn launch to deliver a dummy nuke on a practice target in Arizona. I was walking across the hangar deck headed for the ready room when I realized I left my flashlight in my stateroom. I was going to turn back but then I figured I could borrow one. After we had our preflight briefing I asked the skipper, who always liked to see us off, about his flashlight and he loaned it to me.

We launched in the cold dark and had a good flight in. We went down on the water to avoid the Air Force interceptors; hit the beach, went into the target low level, delivered the weapon and headed back out to sea. It was a little bumpy at low level so we climbed to altitude and headed home. The trouble was my tiny bladder was giving me fits. The other trouble was that the FJ-4Bs that we were flying had no relief tube. With in-flight refueling you could stay airborne close to 8 hours (only limited by the oil supply) and they didn't install a relief tube because originally it was a fighter.

My eyes started turning yellow and I didn't know what to do. Then when I looked down I saw the skipper's flashlight in my flight suit pocket. So I removed the batteries and promptly filled it up and put the cover back on. I looked at my wingman a couple of times with all the bouncing I was doing, but he was OK.

We landed back aboard and while we were walking across the flight deck I told him what had happened and that I would see him back in the ready room after I hit the head and cleaned out the flashlight. When I got to the ready room The LSO (Landing Signal Officer) was already there debriefing pilots on their landing passes. When he came to me with his little logbook he had written LUL (lined up left), SIG (slow in the groove) and PISF. I asked, "What is that PISF, what did I do wrong there?”

He said ''You Pissed In the Skipper's Flashlight."

I said to the skipper "I'm sorry, I'll give you MY flashlight." And he responded "You bet your butt you will." My wingman barely survived and I still have that flashlight to this day. (The Navy wouldn't take it back.) 

[Note: Some stories will never make it into the historical literature.] 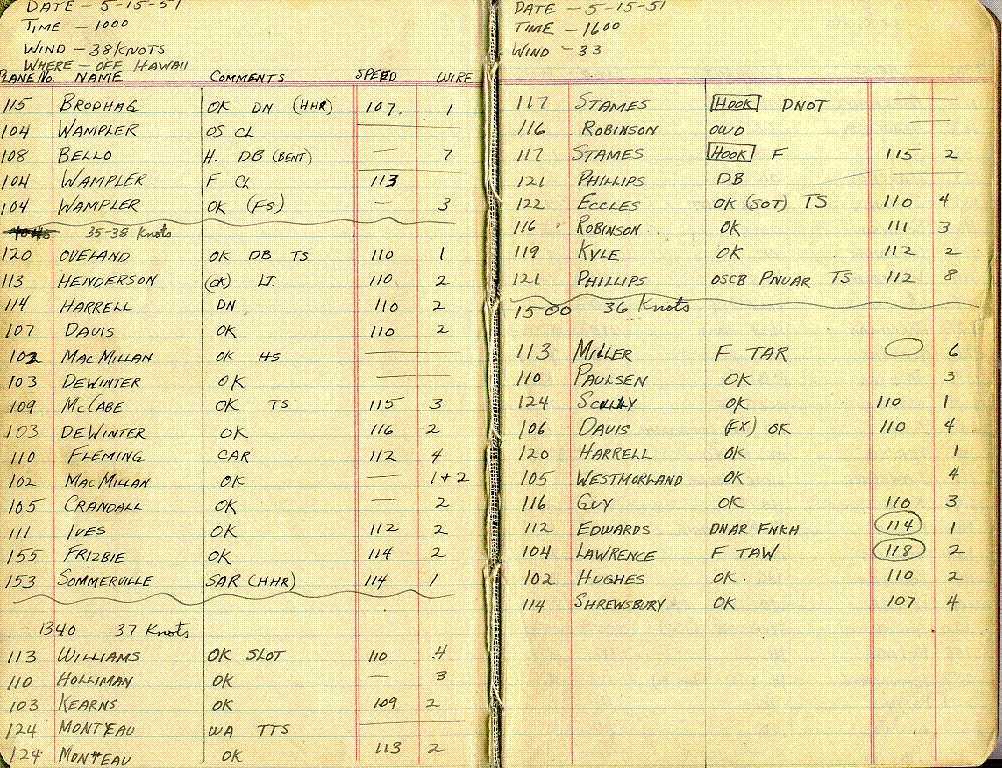 On another mission during the Korean War we were at low altitude on a reconnaissance mission strafing and bombing targets of opportunity. The sky was overcast but high enough for the four of us to maneuver safely. However, with the overcast the B-52's up high couldn't see their targets so they depended on the Air Force surface radar to pinpoint their targets for them and on signal they would release their bombs, blindly. 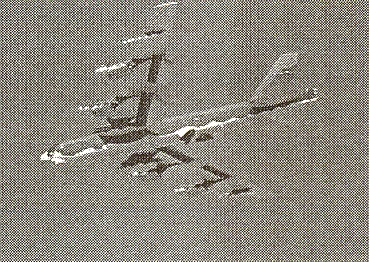 I was leading my division looking for targets while the others were looking out for enemy aircraft and other dangers when all of a sudden my wingman yells out over the radio, "Break right Charlie, fast!" So I did and looked to my left and saw a string of bombs coming down right in our original flight path.

We finished the mission and landed back aboard our carrier. I got to our ready room first and when my wingman walked in I thanked him and gave him a big hug and kiss. Everyone there roared. He was completely embarrassed.

It was mid 1949, I was still attached to VF-1L at NAS Atlantic City, N.J. (They changed the name to VX-3--an experimental squadron). My wife and I were RECENTLY MARRIED and were living in a rental home outside the base in Pleasantville, N.J.

It was a Saturday night and squadron mates drove us out to the Officer's Club for a big squadron party. We were having a good time and getting half smashed when my wife decided to go to the rest room. A while later she came out with some other wives and there I was standing on a small cocktail table in the middle of the Club surrounded by squadron mates and their wives and sweethearts.

I was reciting with the appropriate accent and acting out the poem "Gunga Din" by Rudyard Kipling the way my high school English teacher taught us. When my wife saw all this she said to herself, "MY GOD, WHAT HAVE I GOTTEN MYSELF INTO?"

'E carried me away
To where a dooli lay,
An' a bullet come an' drilled the beggar clean.
'E put me safe inside,
An 'just before 'e died:
"I 'ope you liked your drink," sez Gunga Din.
So I'll meet 'im later on
In the place where 'e is gone
Where it’s always double drill and no canteen:
'E'll be squattin’ on the coals
Givin' drink to pore damned souls,
An' l'll get a swig in Hell from Gunga Din!

Din! Din.' Din!
You Lazarushian-leather Gunga Din!
Tho' I've belted you an' flayed you,
By the livin' Gawd that made you,
You're a better man than l am, Gunga Din!