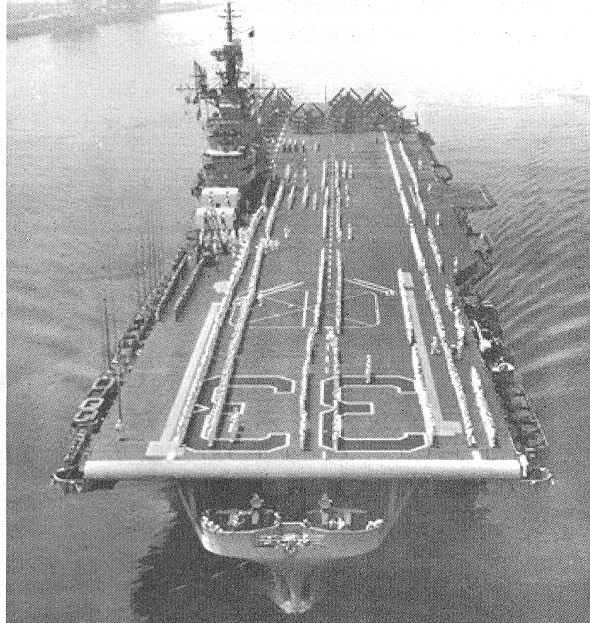 We got off to a "rocky" (actually, choppy) start from Norfolk. The previous day (May 31), the 'QueerBarge' … oops, the Kearsarge and escort DDs moved out from the pier to anchorages to facilitate getting underway promptly the next day. Everyone not on duty headed ashore (of course) for a final fling. The Bay was extremely choppy. Seawater was sloshing in over the stern of the launch in which I rode ashore. I said to myself, "Hope it calms down before we ride back out tonight”

The last launch was to depart at 2400, so we left a nightclub at 2300 to return to the pier. When we arrived, there were still hun­dreds of sailors waiting for boats. The Bay was even choppier. An overloaded launch had swamped and rescue operations were in progress; they continued all night. Liberty launch and regular boat operations were suspended; tugs were used to transport personnel back to ships. The fatality count from the swamped launch was over 30. (Some sailors who had missed sailing claimed that they were in that swamped launch; had been swept out to sea; and washed ashore elsewhere-New York, JAX, New Orleans, etc … Yeah … Right … and Fargo, North Dakota!) But after we got underway, it turned out to be a great cruise.

Ports of call: Suda Bay, Crete (to relieve the Phil Sea); Augusta, Sicily; Naples, Italy; Golfe Juan on the French Riviera (between Nice and Cannes); Argostoli, Greece; Malta Is.; Oran, French Morocco; Tripoli, Libya; and last, Gibraltar (relieved there by the FDR). There were opportunities for some great trips: From Golfe Juan, to Grasse, Paris and Monaco; and from Naples, to Capri, Sorrento, Pompeii and Rome. Occasionally, we flew ashore to Wheelus AFB at Tripoli, and to the British Air Base on Malta.

The exchange rates for the dollar varied widely--300 franc, 350 Lira, 15,000 drachma, etc. A few shipmates bought large numbers of chips at the Monte Carlo Casino at Mo­naco, not to play there, but to take back home for use as a unique set of poker chips. Anyone who wanted to brag as being a big time spender would quote the value of an item as if purchased in drachma. It was kind of a standard joke--no matter what cur­rency or in which port, "How much is that in drachma?"

The French Riviera: Just two years before our cruise, the world's first peacetime A-bomb (20 KT) had been detonated at a tiny atoll in the Marshall Islands. And already, as we stepped ashore on those Riviera beaches, the French style (then 'scandalous') skimpy bathing suits had become famous as the "Bikini" and "I' A'tomic." The most frequent casualty of the whole cruise was probably acute eye strain from checking out those styles. Now, those same beaches are "topless," and no one seems to notice. (Well, almost no one-perhaps I did sneak a few peeks when I was back there 10 years ago.)

In Rome, the Italians get just as excited about their operas as we do about a "wild west" movie. When we attended Verdi's "Aida," there were real elephants parading across the stage for the Triumphal March.

A group of us Kearsarge sailors were privileged to be granted an audience with Pope Pius XII at his summer residence just outside of Rome. We stood in a circle. He went around the circle and greeted and blessed each of us individually. He knew each rate and rank! He also blessed Pius XII medallions for a few of us. His remarkable radiance, brilliance and keen interest in each individual was very apparent. I have continued to treasure the memory, medal and photo of that inspiring occasion.

Rome to Wheelus the FUN way: As Israel was establishing its independency, there were areas of critical instability. Occasionally, we were put on alert to support an evacu­ation (if necessary) of Americans from eastern Med sites. On one of those alerts, we were given just 8 hours to get underway from Naples. Some of our members, up explor­ing Rome, couldn't be contacted in time-too bad! Two weeks later, after the alert was over, when I (and others) flew into Wheelus AFB, as we were walking into Operations to close our flight plans, we walked past some "locals" (we thought), lying in the sand, in the shade of a palm tree, unshaven, unkempt, until one of them said, "hi Dave." There they were-our left-behind shipmates. They had really been roughing it. They checked in with the American consulate in Rome, and described surviving an existence of party after party after party; then got a lift down to Wheelus to rejoin the ship. (Did they really not get the recall message? Where did they hide? Hmmm.)

Traditions: While operating from the airfield on Malta, we spent an evening in the O'Club. The Duty Officer bet us that he could make liquid flow uphill. We lost the bet. He stood on his head and chug-a-lugged a beer. At 1800, he said, "Excuse me gentlemen, while I go pass out the rum ration to the duty section.” The next morning, at the time that I had requested an early call, what did I get: a telephone ring? No. A knock on the door? No. Rather, an orderly standing by my bed, "Good morning Sir, here's your tea." Oh yes, those grand old British traditions.