It has been more than 50 years since Ed Gillespie logged his first flight in a Navy airplane. That was an SNJ at North Whiting Field, Florida in March 1949. In 1999, he still works at his occasionally hazardous profession in high performance airplanes. He presently is test flying all the U.S. Navy T-2C Buckeyes which have been completely dismantled and rebuilt at the Sabreliner Overhaul Facility in Missouri. Then he delivers the jets to their assigned stations, usually NAS Meridian, Mississippi; NAS Pensacola, Florida or the Test Pilot School at the Naval Air Test Center at Patuxent River, Maryland. Gillespie maintains currency flying approximately 100 sorties a year in Buckeyes and also completes the FAA and U.S. Navy annual flight and physical examinations. Ed Gillespie is 71 years old.

Ed first soloed in a Piper Cub in September 1944 at a small airfield near his hometown of Ann Arbor, Michigan. He enlisted in the Navy Aviation Midshipman Program as a 17-year-old while still in high school. After studying engineering at Syracuse University and Western Michigan University, he began Navy Pre-Flight training in the summer of 1948. He had already logged 200 civilian flight hours beforehand. He completed flight training without getting a "down" and successfully carrier qualified in SNJs and F4U Corsairs aboard the CVLs USS Wright and USS Cabot. He earned his wings of gold in May 1950 and was selected to attend Jet Transitional Training – a choice assignment back then – while still a midshipman. The airplanes were single-seat TO-1s (USAF P-80 Shooting Stars) since there weren't any two-place jet trainers at that time.

Fleet duty, as a carrier-based F2H Banshee pilot followed in the next three years. This included 80 combat missions in Korea. As the high time pilot in the F2H, Gillespie also served as the technical director and pilot for four U. S. Navy training films, demonstrating how to fly the Banshee. This assignment almost cost him his life during the filming of a low altitude, intentional inverted spin. He recovered from the spin barely above the wave tops. At that time he was still a bit naive in that he didn't realize the contractor hadn't even successfully tested inverted spins in the Banshee!

After three years of squadron duty with VF-11, Ed was offered the enticing choice of joining either the Blue Angels or attending the prestigious U. S. Navy Test Pilot School. He decided it would be better for his career to study aeronautical subjects instead of going on the air show circuit. He subsequently graduated from Test Pilot School in Class Eleven in February 1954.

From that time on to the present day, Ed has been a test pilot con-tinuously He flew every propeller or jet attack/fighter airplane in the Navy's inventory while serving at Patuxent River. Before the F7U Cutlass entered the fleet, Ed was one of the high time Navy pilots in this infamous plane. Unlike some other pilots, he almost began to enjoy the Cutlass. Its rugged air-frame probably saved his life on at least two occasions.

Following his 1956 graduation from the U. S. Navy Line School in Monterey, California, Gillespie left the active duty Navy and began work for North American Aviation in Columbus Ohio as an experimental test pilot. As he learned early in this career, he still had to deploy regularly, as nearly half his time was spent flying contractor test flights at Patuxent River; Lakehurst, New Jersey, China Lake and Edwards, California and Albuquerque, New Mexico. 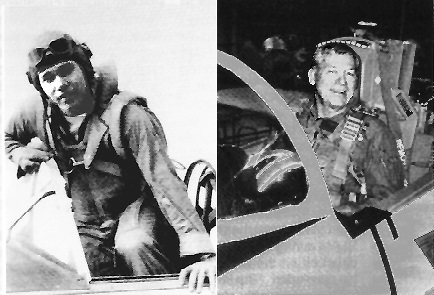 Gillespie in an SNJ-6 at North Whiting Field, Florida, as a midshipman, March 1949; and in November 1997, in a T-2C Buckeye. Gillespie attended the Navy's Test Pilot School at Patuxent River, Maryland, became a civilian test pilot and commanded a Reserve A-4 squadron.

In 1964 he applied for the Astronaut Program when it first opened to civilians but was disqualified because he was three months beyond 36, the age limit. However, that same year he became the Chief Test Pilot at North American Aviation. This happened, unfortunately, as a result of the tragic death of one of his best friends during a test flight.

Over the next 24 years, Gillespie performed experimental flying almost on a daily basis. He flew all series of Trojans, Buckeyes, Furies, Vigilantes, Savages, Broncos, Phantoms, Voodoos and other lesser known aircraft types. Hundreds of these flights were at or approached the estimated limits, or envelope, for the aircraft. Additional flight training later became necessary in the vertical lift realm so Ed went through the U. S. Navy helicopter training program. This qualification helped enable him to land the experimental X-22 vertical riser.

Most importantly, he stayed in the active U. S. Naval Air Reserves for 26 years, concurrent with his civilian flying career. He qualified in the A-4 Skyhawk with the Reserves at NAF Detroit and eventually commanded a Reserve Skyhawk squadron for two years at the base. His polished skills were also utilized as an experienced instructor at the U. S. Naval Test Pilot School during his Reserve active duty periods. He also tested F-4s at North Island and did carrier suitability tests in Vigilantes at Lakehurst. Ed's last several "ACDUTRA" assignments were as CO for Reserve Units NAS Brunswick, Oceana, and NAF Lajes (Azores). In 1982, CAPT Gillespie retired with 36 total years of service.

After retiring from North American Rockwell in 1988, Ed realistically believed his test-flying career was over. Who would hire an aging test pilot? However, it just so happened there were plenty of jobs in which his experience was appreciated. He was soon employed to develop a test program and complete the structural and flutter flight tests on a major modification of the USAF T-37. In order to satisfy the USAF that a 62-year-old Naval Aviator could still safely fly a jet, he completed a three-month flight training program for the side by side jet at Randolph AFB, Texas. Again, Ed set a record of a different sort. This made him the oldest graduate ever of pilot training at Randolph!

After two years with the "Tweet," the Cessna T-37, he did flight test work on a French designed amphibian biplane. Most of this was done while flying from Canadian lakes and seemed to be more fun than dangerous. However, another pilot was killed in the airplane and the experimenting ended. Concurrently, he also flew first flights in several WW I replica biplane fighters. This effort lasted nearly two years and proved to Ed that airplanes of that era were indeed structurally limited and marginally stable.

Gillespie began a lengthy flight engine aircraft in the mid-90s. It looked like a small F/A-18 and climbed like one! It was powered by a 3,000-lb thrust engine and weighed only 4,000 lbs. It demonstrated great performance and provided Ed plenty of unwanted adrenaline rushes. Most of the testing for this plane was conducted at the Civilian Flight Test Center at Mohave, California and was very exciting flying. He did all of the first flights (five different wing/tail configurations) and demonstrated the capabilities of the airplane to the U. S. military at several installations. A fatal crash of a skilled, ex-fighter pilot almost ended the program. After additional engineering work on the aircraft, Ed resumed flight testing the plane with another company near Lake Tahoe, Nevada. Unfortunately, due to a mechanical failure, the president of the company was also killed in the airplane. This accident ended what had been a promising program.

Ed was selected a Fellow in the Society of Experimental Test Pilots in 1977, but he has never been in the right time frame or position to practice in any high visibility programs, such as space flight. On the other hand, he is a work-a-day test pilot who has always managed to complete the often scary and mundane test tasks and deliver the required engineering data, without losing the airplane. None of the hundreds of test programs he has flown were without risk and most required him to establish the airplanes operating limits.

It is believed that CAPT Ed Gillespie has served the U. S. flight test community successfully, continuously and longer than any other civilian or military pilot. He is most proud of the fact he has always landed every airplane he took off in. Some of these planes were not all in one piece or were on fire, but he still got them back. Gillespie has nearly met the grim reaper more than several times during his long career. He credits his survival to good flight planning, conservative flying, moderate skills, and lots of luck!

Ed has logged over 14,000 hours in the sky, almost all of it in single-pilot military airplanes.

"My current contract expires in about a year and a half," he said last November, "and if another one doesn't come up, my test flying days will be over. But I'll certainly keep on flying 'non-test' aircraft as long as my health holds up, and I'm happy to report I'm enjoying very good health these days '”

CAPT Gillespie is a proud member of ANA's Helldiver Squadron of Columbus, Ohio, and author Jim "Stoof Driver” Shaw is XO of the squadron. Gillespie, by the way, has a noble sense of aviation history as the following article clearly demonstrates.

Ed Gillespie (see previous article) is about as old as the terminal structure depicted on this page. Moreover, he is the key person responsible for its restoration. It is the original passenger terminal at Port Columbus International Airport, Ohio, the same building that greeted air and rail passengers traveling between New York and Los Angeles in 1929. Ford Tri-Motors were familiar sites at the airport in those early days of air travel. The terminal had been the most modem of its kind.

The city had planned to raze the old building but Gillespie, realizing the historical signi-ficance of a terminal which had been visited by the likes of Charles Lindbergh, Roscoe Turner, Howard Hughes and Douglas "Wrong Way" Corrigan had a better idea.

In the top photo, as Gillespie describes it, "the original building is in the middle of this mess." Additions to the structure were done in haphazard fashion. The second and third pictures show the restored tower and building replicating the 1929 design.

He arranged a 40-year lease with the city and set about refurbishing the building to its original state. As the first photo shows, the tower building had been expanded in a rather careless manner with add-on structures as time went by. After the tear-down, Gillespie was left with a brick building with a flooded basement, unusable utilities, a rotting interior and a roof patched so often it sagged in places. Much of the rebuilding was performed by trusted friends of Gillespie who were retired test-flight mechanics.

Gillespie obtained the plaque that had been on the building when it was dedicated as well as the original rotating beacon that had been on the tower. In the end, Gillespie had invested 48 months and $600,000 in the project. The results were clearly impressive. It was a genuine work of love for the test pilot and the end product reflected that.

Interestingly, many of Ed's early test flights were controlled from the original tower at the airport. In those days test flights used the name of the pilot in communicating with the tower. One day when he was short on fuel "Flight Ed" asked for and was granted landing clearance. A TWA pilot heard the exchange and asked the tower, "If I tell you my first name, can I land early too?"

The facility stands as a tribute to yesteryear, thanks to a test pilot with a noble sense of aviation history. 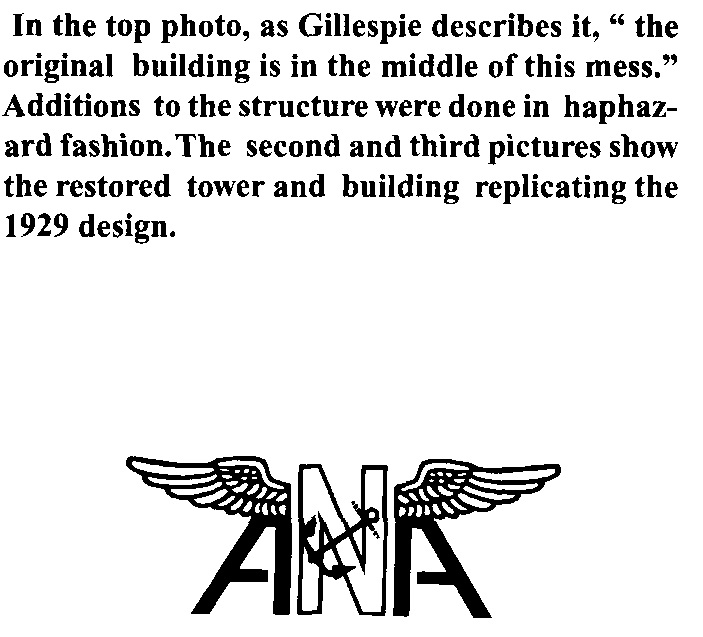