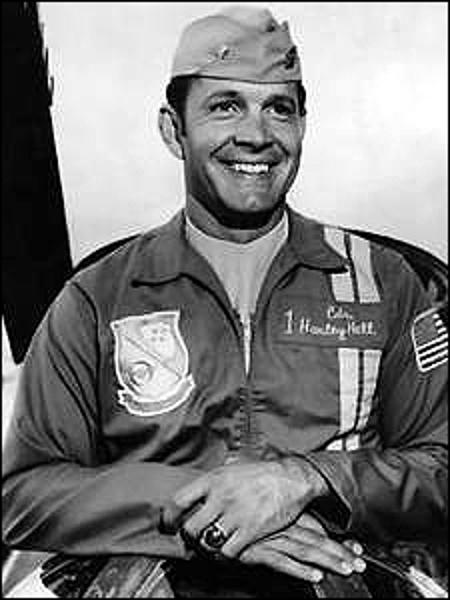 The thousands who watched Cmdr. Harley Hall’s feats with the Blue Angels precision flying team were many miles away when he ejected from his aircraft over South Vietnam.

A Pentagon spokesman said Hall was the last Navy pilot to be shot down before the ceasefire agreement ended America’s longest war.

But his wingman returned to the aircraft carrier Enterprise [CVN-65] and reported he saw the flier and his copilot “alive and on the ground and functioning,” said Hall’s wife, Mary Lou, in San Diego, Calif.

Hall, 35, and radio intercept officer Lt. Cmdr. Phillip A. Kientzlar were listed as missing in action after they bailed out over Quang Tri Province. South Vietnam, on Jan. 27—the day the cease-fire went into effect.

“He’s one of the finest officers we have in the Navy today,” retired Vice Adm. Bernard M. Strean said Thursday in Washington.

“He’s all Navy, one of the most outstanding pilots in the military and young man with a long way to go,” said Strean, retired chief of Naval Air Training and Hall’s former superior. “I knew that when we selected him for the Blue Angels, and I’m even more convinced of his caliber today.”

A native of Vancouver, Wash., Hall was selected over 2,000 Navy pilots to head the flying showcase in November 1969.

He took the glamour job following a three-year stint in Vietnam during which he earned 11 air medals, the Vietnamese Cross of Gallantry, and the Navy Achievement medal and chalked up 560 aircraft carrier landings and 150 combat missions.

Between November 1969 and January 1972, Hall and the Blue Angels toured the United States, the Pacific and Southeast Asia, demonstrating their precision flying in six F4J Phantoms.

When his tour with the Angels ended, Hall moved his wife and daughter, Heather, 5, from Pensacola, Fla., to San Diego, and left for yet another stint in Vietnam.

Shortly before he disappeared, Hall wrote Stean that he thought the heavy U.S. bombing was bringing the war to a fast close. He said he was looking forward to returning home and going back to school.

“Besides his love of flying, he loved learning,” Strean said. “More than anything, he wanted to get a PhD.” In international relations.

Now, as Mrs. Hall awaits the birth of the couple’s second child, she concentrates on her husband’s future.

“I think my husband’s a wonderful, special man,” she said, “If he says he will some day get a doctorate, he’ll do it I just know he’ll come back and get it.”