In regards to Fred Schneider's letter about LT Mano and "Mighty Mouse," I was there when it happened. Glenn Fallis had 'hollered' down the passageway "Hide the cheese, the Mouse is in the building." At the outside formation Fred mentions, MM threatened to have us fall out behind the barracks an hour before reveille. I don't remember if that happened. Glenn was later killed in an S2F during night ASW operations.

LT Mano no doubt had an impressive WW II record being in at that time. He would have been a "lifer" probably unless riffed like Mioducki. It would be interesting to know more about MM other than he was a gymnast preflight instructor. I'm sure he was a pilot and probably decorated. Walt Thomas was living in that barracks at the time. He and Charley Axell built and flew beautiful Navy aircraft .models. I remember the Corsairs and ADs. Maybe more members will write something in about Mighty Mouse?

I was ordered to the USS Valley Forge (LPH-8), in August 1962 as Meteorological Officer and duty involving flying helicopters. The C.O., Captain H.S. Jackson, reported aboard about a week before I arrived. He was from Gloucester, Mass., USNA class of '44. Gloucester was known for over a hun­dred years as the place of wooden ships and iron men. Undoubtedly Captain Jackson came from a long line of whaling captains all the way back to Capt. Ahab! A few days after reporting, we were ordered to depart Naval Station Norfolk and Hampton Roads because of a hurricane east of Cuba which was moving northwesterly. This was to be the first time for both the Captain and Myself to go to sea in the Valley Forge. The Captain immediately issued orders for a briefing with recom­mendations from me which I hurriedly prepared and delivered. 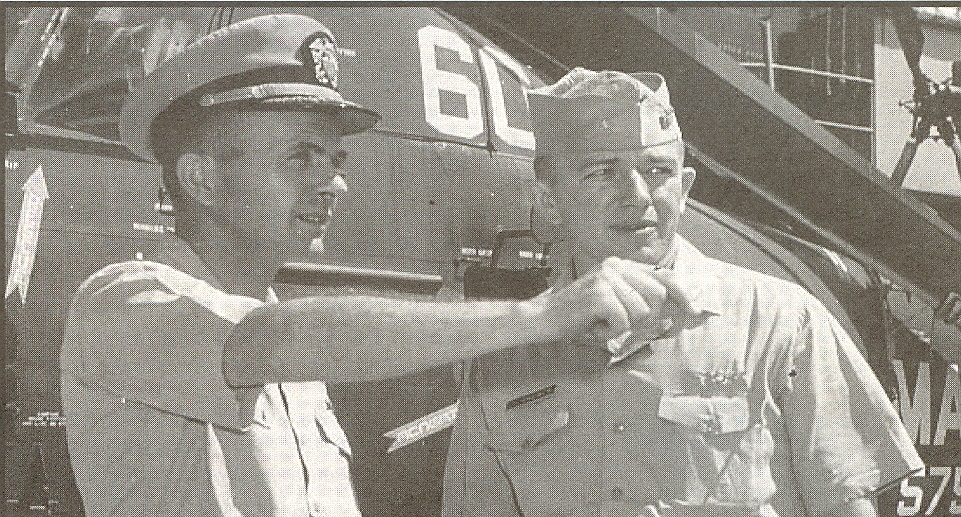 I advised him, based on a five day prognosis of charts and climatology, that the hurricane should curve north and pass between Norfolk and Bermuda within four days or less. My recommendation was to sail the ship down the coast around Hatteras to Naval Station Mayport. We would have fol­lowing winds and seas, entering Mayport of course after the hurricane was north of our latitude. We could have liberty for one night then return to Norfolk with minimum disruption.

The C.O. rejected my recommendation, however, and proceeded toward Bermuda. He said the first rule of seamanship was to maintain plenty of searoom. The hurricane accelerated and in a cou­ple of days caught us before we could get to Bermuda. We experienced winds of about 120 knots with higher gusts. All we were able to do was to put the ships starboard quarter toward the wind and maintain steerageway. We had a wild ride for a couple of days before the hurricane increased speed and turned us loose. Of course the seas were mountainous, breaking the metal weather cur­tains on the hanger deck, starboard side, damaging a couple of helicopters, launches, and other ex­posed ship's gear. 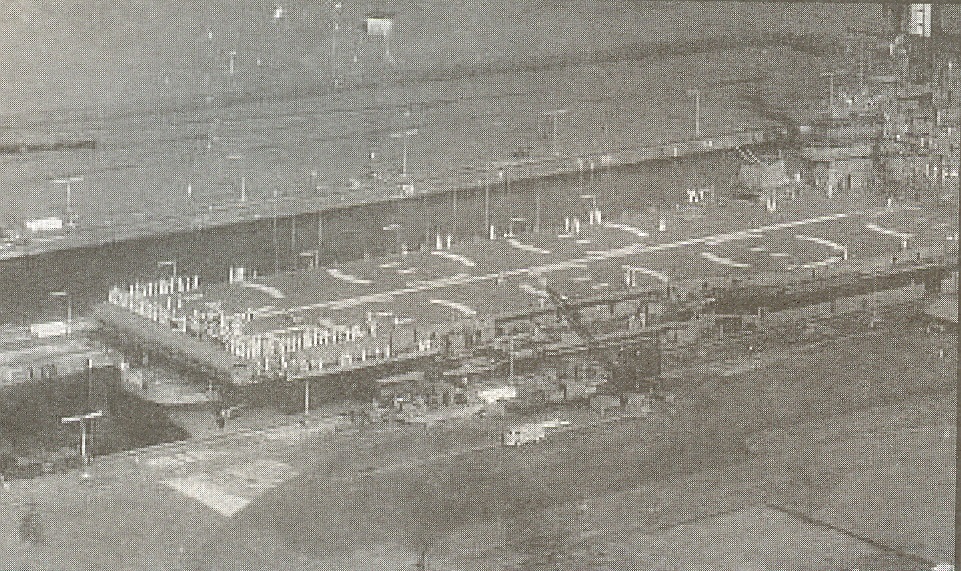 We limped back to Norfolk, went into Portsmouth for repairs, then headed for amphibious exer­cises in the Caribbean prior to deployment to Southeast Asia. We did return to Norfolk before transiting the Panama Canal. We had to have the sponsons and gun tubs cut off so we could make it through. In size, we were the biggest ship to transit the canal at that time, probably not the heaviest in displacement though (the Valley was 40,000 tons). (Note photo of the ship completely filling the canal) The Valley Forge was launched in 1945 as a CV A and after the Korean war was converted to a LPH for Marines and their helos. Quite a few Flying Middies served on the Happy Valley; some have been featured in the LOG, (See Summer 2001 for the riveting story of aviators Schechter and Thayer. Those guys were real pros AND heroes!)

We went through the canal in Jan. 1963 with a large number of automobiles tied down on the flight deck and hanger deck since our new homeport was to be Long Beach Naval Station. After exiting the canal, we stopped at Punta Arena, Costa Rica and probably influenced the Presidential election. There was a favorable outcome for the candidate we hosted aboard who was treated royally and received wide publicity. I was in San Jose at the time as the senior shore patrol officer with a real train load of thirsty sailors with raging hormones. The newspapers were calling the ship "Portaavion de Automoviles" or automobile carrier since no aircraft were visible. 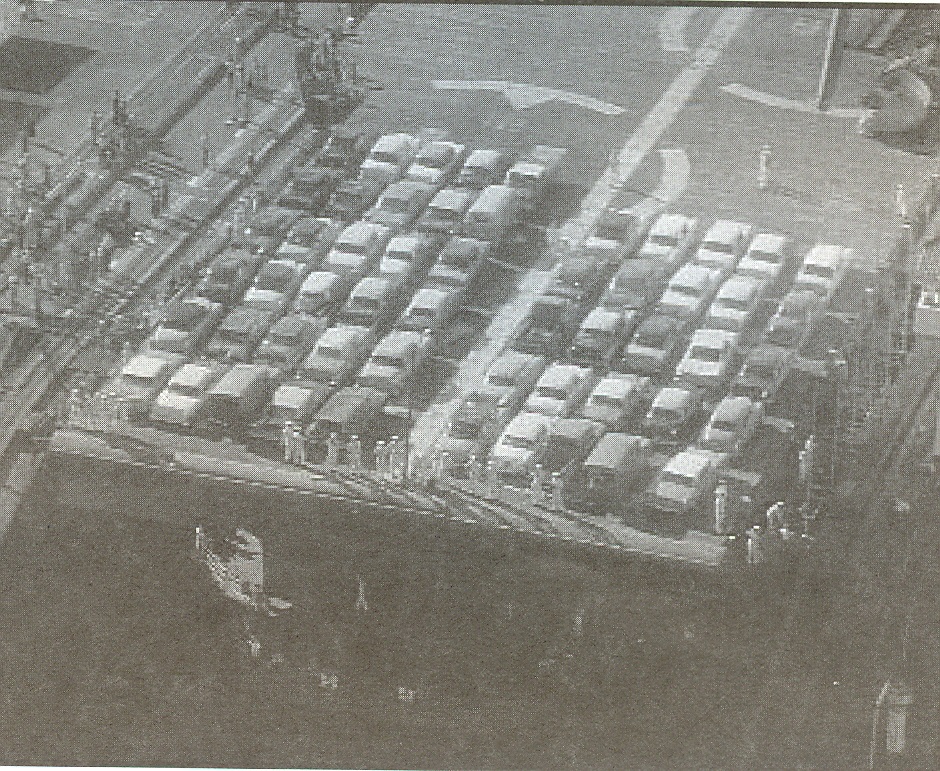 Next stop was Acapulco, Mexico. The crew was entertained on board by a contingent from the Mexican Army with an orchestra and many senoritas. A dance was held on the hanger deck. The C.O., with me and several other officers had to fly to Mexico City for a flag and floral wreath laying ceremony with the US ambassador, the mayor and other officials including Mexican Admirals. The moniker "Portaavion de Automoviles" stuck there also. (They were having fun with us!)

Continuing on to Long Beach where our cut-off protrusions could be wielded back on, we off-loaded the autos and enjoyed liberty in Southern Calif. We then proceeded to Camp Pendleton where we picked up 1800 Marine Troops; and two helicopter squadrons. Other amphibious ships joined us and we preformed landing exercises. Forecasting was done on sea, surf, swell and beach conditions for these. We then headed for SE Asia, stopping in Pearl Harbor; later we had one last exercise off the Hawaiian coast before heading for Thailand. We off loaded Marines near Bangkok who were being sent to Laos; and later returned to Cubi Point/Subic Bay, P.I. Before joining an Amphibious Task Group for additional exercises. 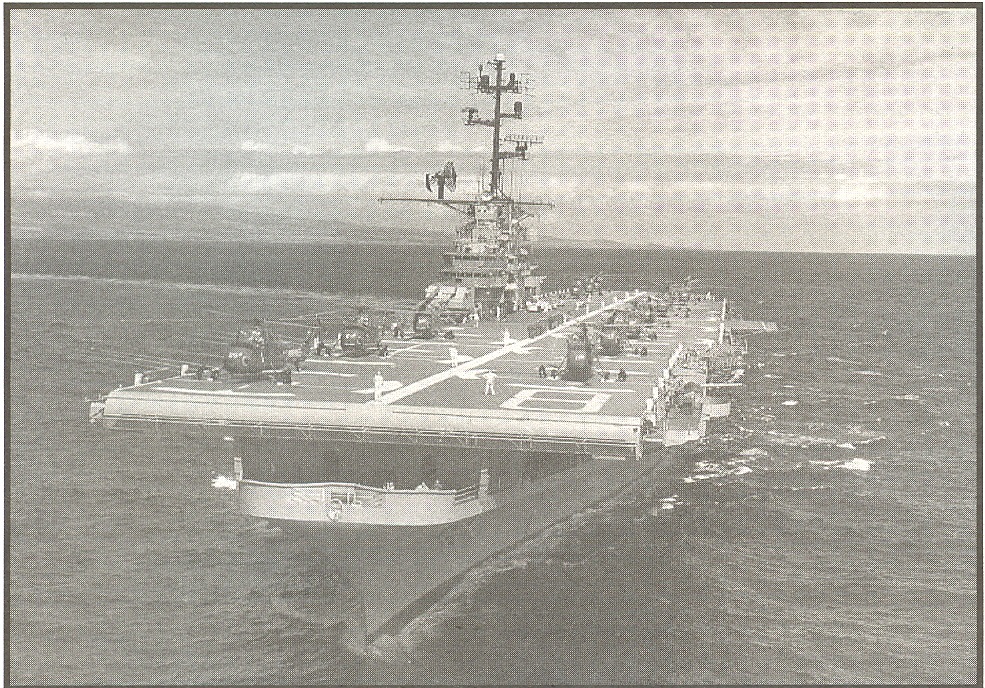 Subsequent to this training, we were went to Hong Kong for R & R with the Task Group. On the way I received notice of a typhoon heading our way and with estimated landfall on the east coast of the P.I.s. I briefed the Admiral and the C.O. and recommended a turn to the south and wait until the typhoon transited north of us in the South China Sea. I believed it would make landfall in China near Hong Kong. My recommendation was immediately taken, events occurred as forecast and we finally arrived in Hong Kong after a direct hit on Hong Kong from the typhoon. Upon arrival we were asked to give supplies (blood, money, etc.) and to launch helicopters to search for 17 missing ships from the harbor. We complied with all the requests and during the search found 23 ships beached or grounded; six more than the authorities knew about. I climbed into the ship's helo to have a look and saw some freighters on their side, high and dry with their screws in the air. These groundings were caused by the surge tide from the typhoon and winds which blew at about 160 knots.

Coming out of Hong Kong we were ordered to travel along the coast of China between 3 and 12 miles. The U.S. recognizes a 3 mile limit for territorial waters and China claims 12 miles. We were also directed to employ our ECM units for electronic intelligence. Soon many radars, air control nets and other transmission sites along the coast were fired up. We were buzzed by Migs. We copied a lot of frequencies desired by DIA as we proceeded toward Hainan, Vietnam. Later dozens of junks started crossing our path apparently to stop us or cause a collision. Finally we cut a Junk in two from a 'forced' collision. Reminiscent of the USN Lockheed P-3 being forced into a collision a couple of years ago. China filed a complaint with the U.N. but no action was taken. The U.S. had no diplomatic relations with China at that time.

Eventually we set sail for home stopping in Okinawa for the marines. We then tried a great circle ship routing to Long Beach. This took us far north near the Aleutians which brought us into a 4,000 mile fetch on the south side of the Aleutian lows. In this ocean area we experi­enced strong following winds and waves, partly sunny conditions and an additional train of high waves with occasional 80 foot waves.

These were coming in near the stern, almost breaking on the flight deck and rolling the ship up to 20 degrees. This caused a lot of seasick­ness and the securing of regular dining due to breakage of china. We made a great SOA (speed-of-advance), however, and outran most of the 80 footers. Optimum Track Ship Rout­ing (OTSR) from F'WF Alameda did a very nice job for us.

After returning to the States, I was ordered to the Fleet Weather Facility Miami. One of my duties was coordinating hurricane forecasts in the Atlantic, Gulf of Mexico and Caribbean with the National Hurricane Forecasting Center and getting information on them from the fa­mous Navy Hurricane Hunters. The NHFC & FWF Miami were both in the same high rise 1920's type stucco building. One night while on duty a category three hurricane made land­fall at Miami with the eye crossing town and our old building. The high wind blew out the windows on the northeast side and flooded our transmitter room, disabling the transmitters we used for communication with the Hurricane Hunter aircraft. We took all the mattresses from the bunk room and shored up the windows.

As the eye was over us (20 mile diameter), I couldn't resist going to the top of the 10 story building and observing. The first thing that amazed me was the plaintive wails and cries from all the birds that were trapped inside the eye. There wasn't much noise except for the cries. I could hear the high winds in the eye­walls which were several miles away and see con­tinuous lightning in the eyewalls. Also with the descending air in the eye there was much more heat. As the distant wind noise got closer, I de­cided it was time to go below! It slowly passed us that night with no more damage to the facil­ity.

I retired in the South Texas hurricane belt and have had to dodge several more hurricanes since then.