“Guide Me, O Thou Great Jehovah”

Singing the hymn that is the title to this story has always brought back memories of a particular mis­sion I flew during the Korean War. It occurred on 12 Septem­ber 1951. At the time I was a member of Carrier Air Group 101 flying from the aircraft car­rier USS Boxer (CV-21) as part of Task Force 77 stationed off the east coast of Korea. 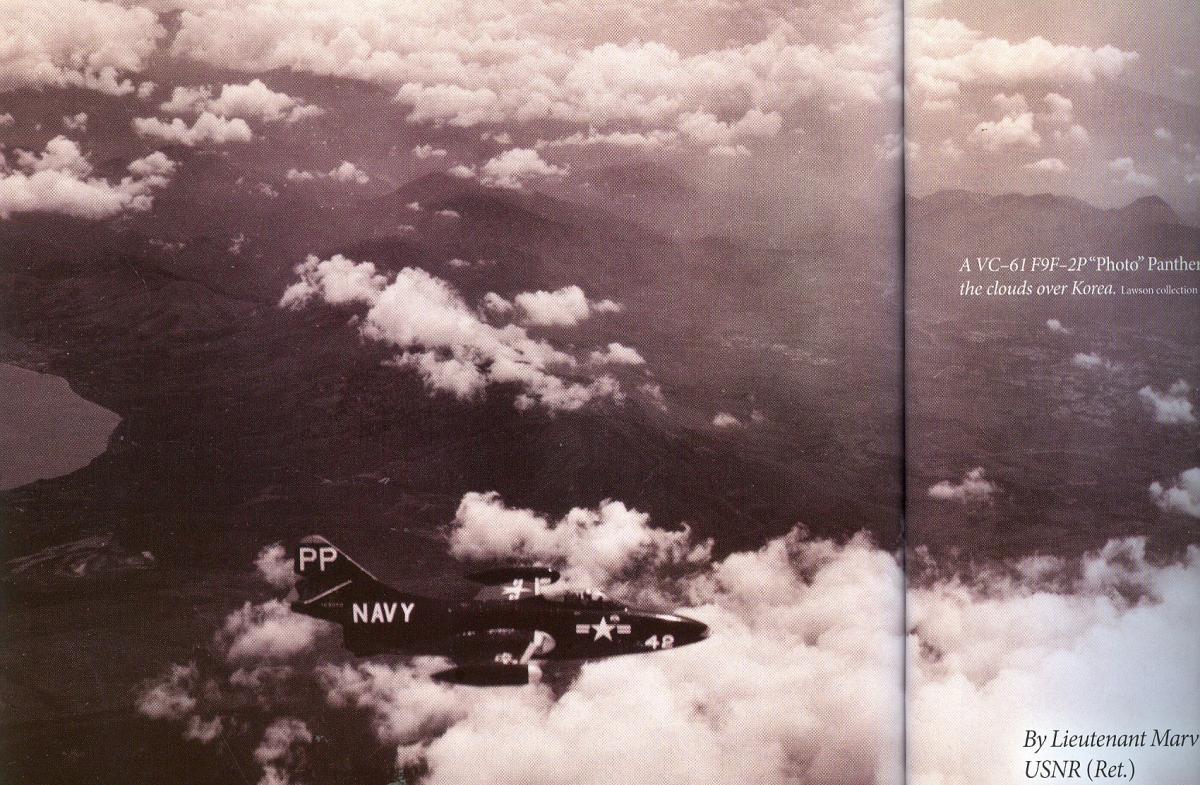 The target of the mission that day was the city of Manpo'jin situated along the Yalu River. I flew the F9F-2P Panther, a new photo reconnaissance aircraft which had the same performance as reg­ular fighters, but instead of four 20mm cannons we carried cameras in the nose section.

Briefing for the mission was extraordinarily detailed because it was the farthest distance from the carrier of any mission, and we were tasked to photograph all the airfields around the city and those in nearby Manchuria, looking for MiG bases. Fuel management was critical as we would be around the limit of our combat range and in those days we had no air-to-air refueling capability. Flying time to the target was about 50 minutes which gave us only minimum time over the target area. 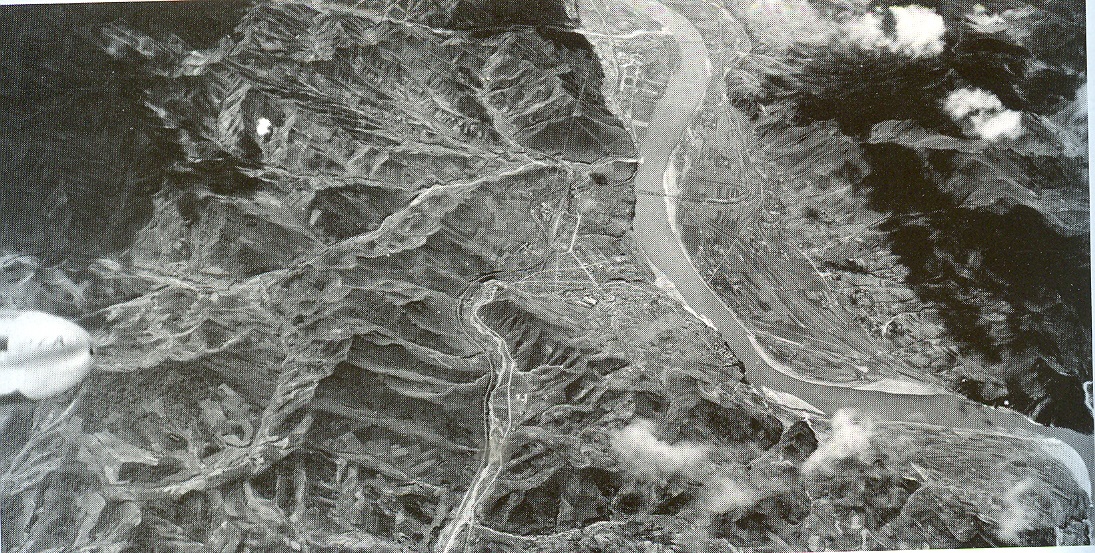 Off we went on a partly clouded day straight for Manpo'jin over territory we had never seen and which was beyond helicopter range in case we went down. We planned to start our cameras on the far side of the city, photographing along the Yalu in an easterly direction. No sooner did the cameras start, however, than so did the flack. It was heavy, and yes they were protecting the airfields on both sides of the Yalu. Chang­ing altitude and jinking helped avoid the flack but on passing east of the city I heard on the radio, "Birdie there is a MiG at your eight o'clock making a run at you. ‘ I instinctively turned left towards Manchuria and dove for the scattered cumulus clouds well below me. I then went from cloud to cloud in a generally easterly direction checking my six to see if anyone was back there. Completing the diving turn left me heading for the open sea.

Luckily I made it to the coastal town of Ch'ongjin without anyone on my tail and crossed the beach line to be happily over water again. Unfortunately the clouds disappeared but I just kept checking my six and nobody showed up.

I also lost my wingman when I made the turn over Manchuria. The rules of engagement did not permit us to overfly Manchuria, but, what the hell, because in making the turn I was able to lose the MiG.

Turning my attention to navigating back to the carrier I took up a southeast heading and turned on the YE receiver hoping to pick up a more precise heading. Under combat condi­tions of radio silence the carrier turned off the jet homer and at that moment I was too far from the ship to hear any YE transmission.

It was now a beautiful day at sea without a cloud in the sky. I had the throttle back to max cruise at 20,000 feet and had about enough fuel to get back to the task force which I estimated was 45 minutes.

I called my wingman both on the tactical and emergency frequencies to no avail so it was going to be a long, lonely ride back home. All I could do now was sit and wait and call the ship every five minutes or so by transmitting "Buzz­saw this is Graphic Four Buzzsaw calling in the blind and I am alone ... " to which I received no response after making at least four or five transmissions.

Finally I did pick up the YE transmission from the ship so was able to alter my heading accordingly, but still no one responded to my transmissions. Suddenly, after my customary five minute transmission, I heard, "Graphic Four Buzzsaw, this is JEHOVAH:”

My head snapped back and I looked up to heaven dumfounded. When I returned to my senses I looked through the voice codes that were in place for the period of my mission and no "JEHOVAH" appeared any place else on the briefing page.

Yes ... I had sung the hymn many times so why not go for it.

I replied, "Jehovah this is Graphic Four Buzz­saw, can you contact Buzzsaw control? Over:” And so started my conversation with Jehovah that eventually permitted me to receive instruc­tions to approach the landing pattern above my carrier.

Was I dreaming? I don't know, but when I finally put the plane into a dive heading for the task force I did not take anti -aircraft fire. And when I flew past the starboard side of Boxer I saw the Fox signal flag flutter up to the two block position saying to me that I was cleared to come aboard.

Flying from axial deck carriers we flew a flat race track pattern about 75 feet above the water and picked up the LSO at about 90 degrees from the landing heading. That day I was fortunate to "ride the cross" all the way around to receive the cut from the LSO, making me one happy ensign.

Upon landing I was waved to a position forward of the barri­ers when I heard the deck bull horn announce, "Send that pilot up to the flag bridge:” I was sum­moned to report to the admiral, not good for an ensign who was commissioned less than a year. A captain met me on the bridge and introduced me to Rear Admiral W.G. Tomlinson, who smiled and asked, "What happened son?"

I described my adventure up on the Yalu, the MiG and my conversation with Jehovah, saying the last event had me dreaming. This resulted in a smiling admiral pointing to a VHF transceiver located at his elbow and saying, "Son, you were talking to me and this is the only radio in the task force that was able to receive your transmissions:” "JEHO­VAH" happened to be Task Force 77's call sign.

Guide me, O thou great Jehovah, and He did and does.

Lieutenant Marvin Birdt, USNR (Ret.) started pre­flight school at Pensacola with class 17-48 and received his wings on 17 March 1950. He joined VC-61 (VFP-61) as an aviation midshipman, and transitioned to jets in December 1950. He went aboard USS Boxer (CV-21) for the deployment that commenced in March of 1951. Birdt flew 76 combat missions and during that deployment was the only ensign in the air group. He returned to the states in No­vember and was released from active duty in August of 1952. From 1952 until the summer of 1960, Birdt flew in VF and VA squadrons in the Ready Reserve from Los Alamitos and Floyd Bennett Naval Air Stations. When the Navy ceased flying jet fighters from Floyd Bennett, however, Birdt retired from aviation. He then spent his business career in industry and retired as a corporate financial officer in 1991.

Birdt has two sons and three grandchildren and lives with his wife Lynne in Fort Myers, Florida.