“Recollections of an Old PBM Pilot” * 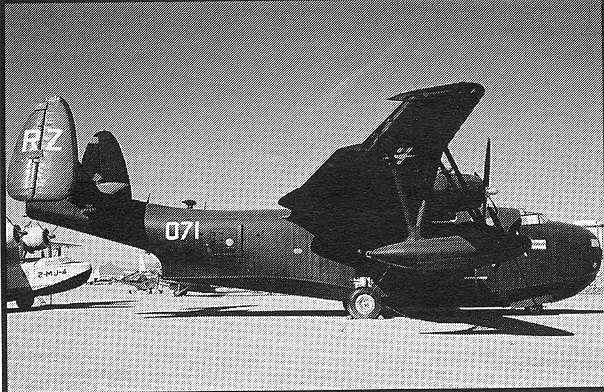 Most of us who were assigned PBMs after basic flight training received the news with sadness and almost embarrass­ment. Whether one wanted multi­engines or fighters, the PBM was considered the slowest and low­est in the aircraft pecking order. There might have been a "selec­tion" process that assigned the most skillful in basic training to fighters, I don't know, but I know there were plenty of long faces among those of us "sentenced" to main side at Corpus Christi as opposed to Kingsville and other fighter training hot spots.

Anyway we coped as best we could and found out there were skills in PBM training that not only consisted of flying skills, but things fighter jocks didn't have to deal with. These were "water handling" skills. Such things as wave action, water current, using sea anchors, slow­ing technique to make a ramp buoy, and landings that continually changed in technique with different water conditions and sea state. Also there was the fact that after landing there was still work to do taxiing around waiting for a shot at the ramp buoy. I can recall many times on joint squadron operations out of Guantanamo when at night after landing I had to taxi for hours (it seemed) to wait for my shot at the ramp buoy. My heart would be in my mouth worrying about running aground or hitting some other aircraft. As an ensign PPC I was usually among the last in the line up to make the ramp buoy.

As for hair-raising experiences I really can't think of anything at this time. Sure, turbulence and rough water landings would get the adrenalin pumping, but being an East Coast aviator I missed the more frightening ex­periences of my West Coast friends who had to put up with flying in combat with an overloaded slow-moving target that only flew at 120 knots. One thing I do re­member that used to bring a laugh was the reaction of fighter jocks who would have to ride in a PBM. When my squadron, VP-34, was based in Norfolk at the start of the Korean War we had many flights down to Gitmo. We usually had a fighter jock, or two or three who would have to ride along to get to their assignment with some carrier or air group currently in Gitmo.

Their look of almost utter contempt as they wandered around the flight deck, was unmistakable. (There was no place to sit except at a working crew station). This soon changed to a more concerned expression after the plane got into the wa­ter and began to flounder about, one wing float down, then the other as the plane moved into and out of the wind and waves. And of course the noise! With little or no sound proofing conversation had to be held to a minimum and required shouting almost in one's ear. Then the engine run-up! When the pilots would do them one at a time the aircraft would spin around in circles bouncing and bounding around the water giving these jocks more concern.

Finally the take-off! After the take-off power was set on the overhead throttles the aircraft nose would rise up to a ridiculous angle with the noise overwhelming. The old beast would wallow, bump, grind, and gyrate, un­til finally enough speed would be achieved to allow the nose to come down to level flight, but still on the water. At this time a rapid bump, bump, bump, or slap, slap, slap, again depending on the sea state, would be heard. I still laugh when I think about these guys looking out the cockpit between the two pilots and seeing Willoughby Spit disappearing off to one side, and Newport News get­ting larger and larger in front. Finally after what seemed an eternity the aircraft would finally prove the theory of lift and wallow into the air. The jocks expression of relief was priceless.

The landings would give a similar look of concern when again the flap, flap, flap, etc after touchdown would be heard until the beast would settle off the step and become a floundering strange looking power boat to other boats in the area. The jocks always seemed very happy to get off and back on dry land especially since the final indignity was having the aircraft hooked at the stern to a tractor and pulled ass-end first up the seaplane ramp to the parking area.

Footnote: I'm an old PBM pilot from before I succumbed to the airlines in the mid fifties. So the write-up above is my memories of flying the old beast. I really have no "hairy" stories to tell, just boring flying where the turn after holding a course for several hours became a big event. Russ.