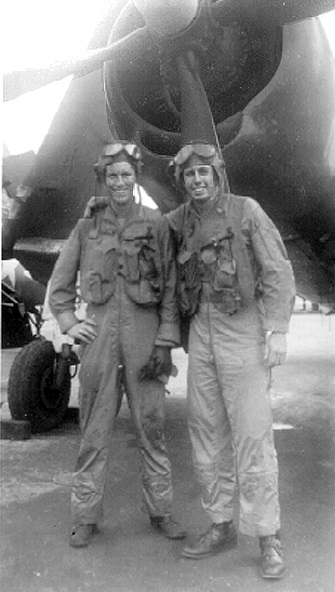 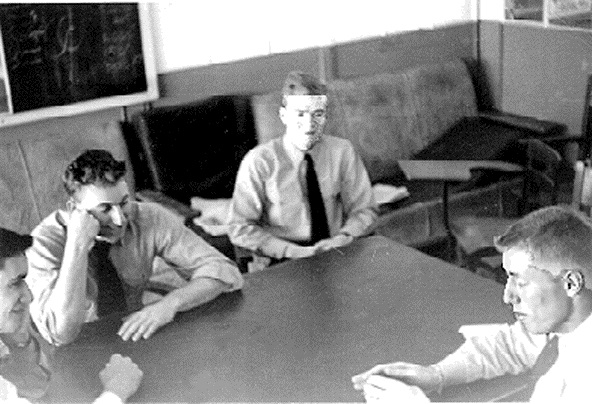 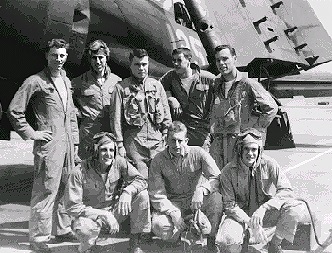 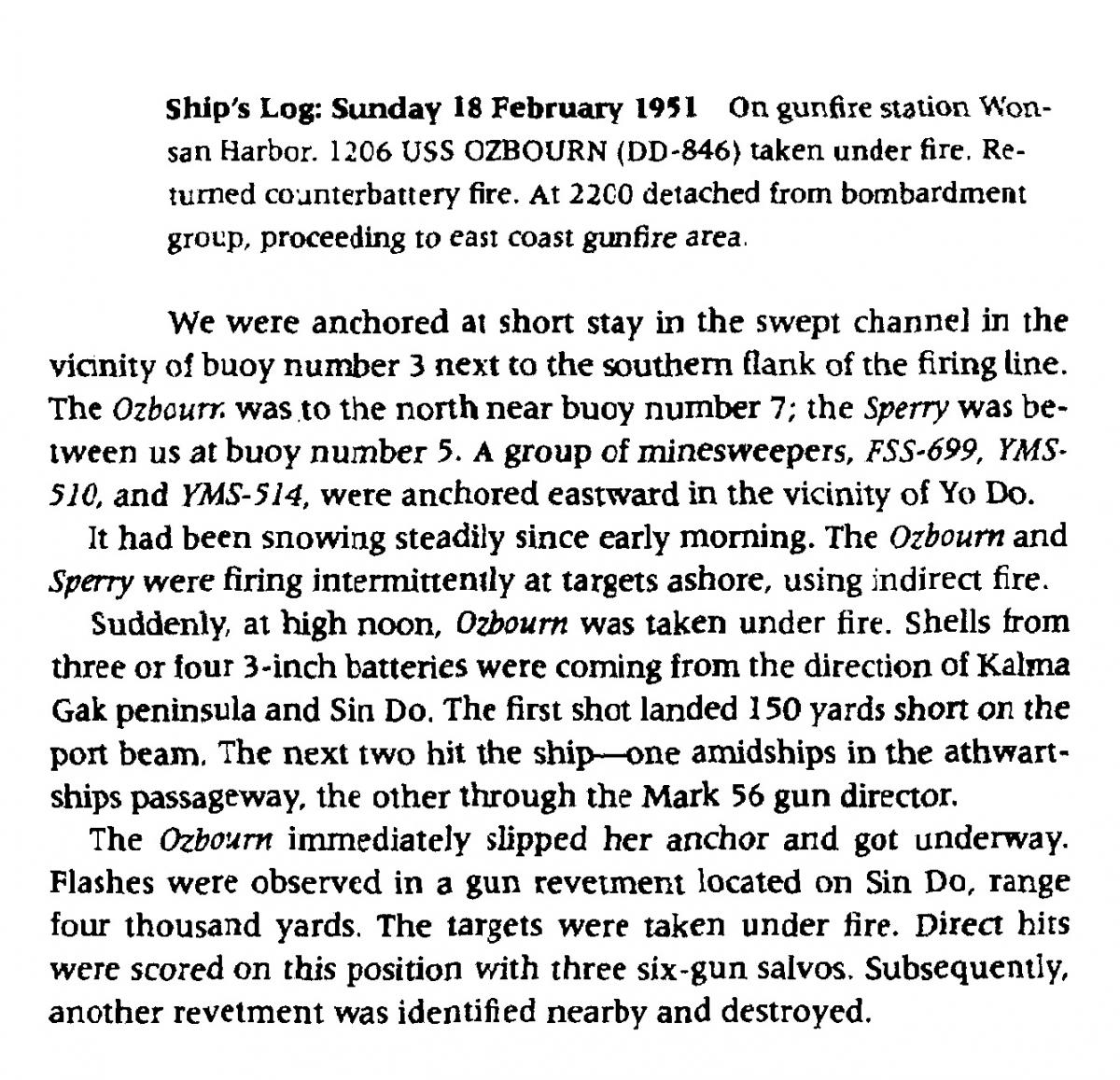 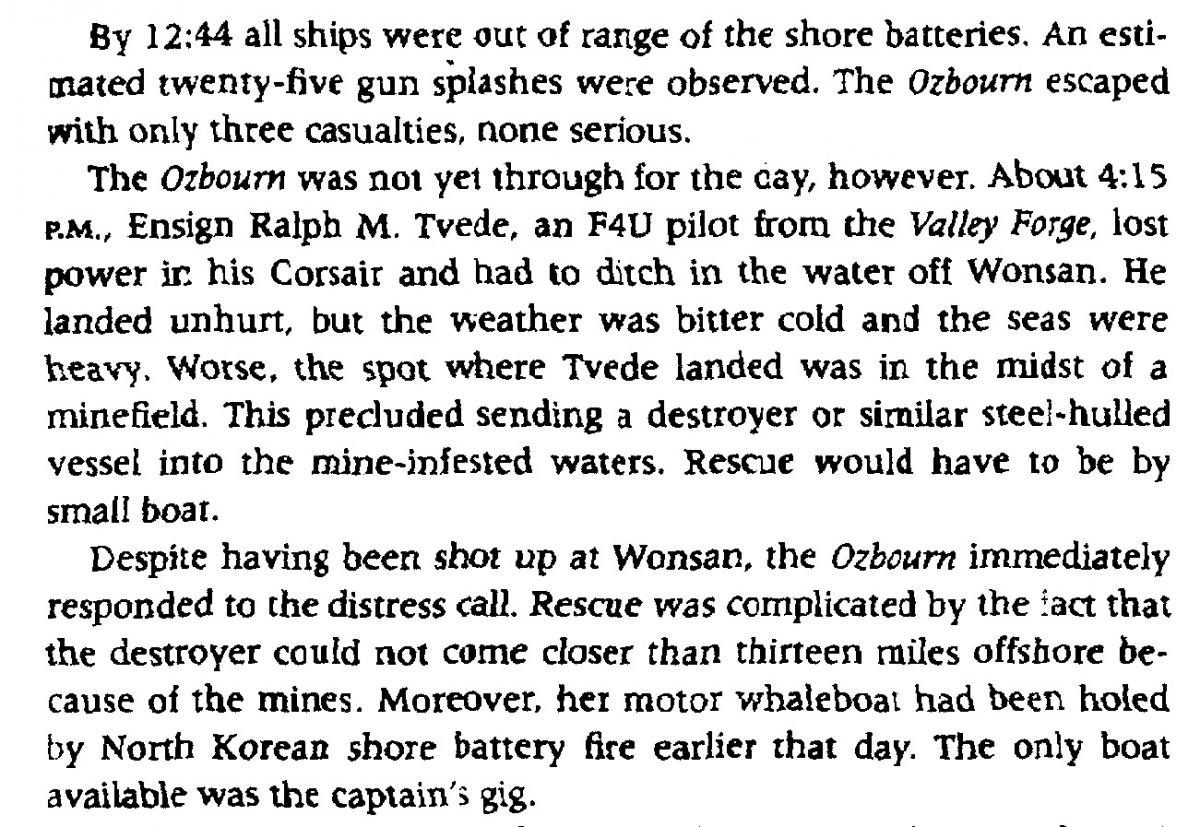 Forgive my tardiness!! The arrival of your letter of 10 May was coincident with that of a 4 year-old whirlwind (grandson) who kept us totally occupied for two weeks! Then a few days to recover, and here we are at month’s end.

Enclosed is the info you asked for. I am delighted to have been chosen as an honorary OZBOURN shipmate, with all right and privileges. I am sure that also means that I am to participate in supporting the association and expect to be notified of dues or other fees required of regular members.

Along with your letter, came one from Pete Cole, to which I shall reply in due course. He expressed surprise that I remembered you all (not the idiom: y’all, I’ve been in the South for lots of years, but I still speak with a Navy accent), but how does one ever forget an event that was so monumentally important in one’s life. I’m sure that I would NOT be able to identify any of you or recognize any of you if we met, but that certainly does NOT mean that I have not spent most of my life wondering who you were and what became of you. About the only real memories I have are waking up, stark naked on the wardroom couch, to see several persons peering at me almost as though from the gallery of an operating room, and the bacon, eggs, and toast that tasted so darned good. Don’t know that I even thanked the cook for his 1 or 2 AM effort. In retrospect, I have always been sorry that I did not choose an alternative I was given – to spend a few days with you. I was awakened at an early hour and told that I could high-line to CHARA, from which you were replenishing or wait on board for a week or so until the next one. As it was, I went to CHARA and spent about three days aboard running her out of hot water; spent a good deal of time in the shower or in a windless cubbyhole in the sun. I didn’t think I would ever get warm again!! (I did).

As to John Moriarity, I recall that his sister-in-law (Naples 1958) indicated that he had already left the Navy. As I mentioned in our phone conversation in April, up till 1952 I knew all the roads and by-ways from Santa Cruz to Calistoga, with relatives and acquaintances in between. However, time has taken its toll, and I have few contacts remaining out there. My wife’s mother died last January, so our frequent trips to Livermore have been curtailed. It would have been fun to give you a hand in searching for John, but …

I’m glad the re-union was a success, and I thank you for passing my remarks and sentiments to those in attendance.

Hi! A real surprise to receive your note. However, don’t know which avenue to pursue in response!

The connection with OZBOURN is very interesting – almost like a trip to see the wizard (OZ). Why should these connections keep developing?? I responded to an ad in one of our military magazines a couple of years ago announcing the 1993 OZBOURN re-union by contacting Bob Whitten on the telephone. He was somewhat surprised to hear that I was still looking for an opportunity to express thanks and gratification for efforts extended by the crew of OZ on my behalf in 1951. The upshot was my description of what I felt was a rather remarkable coincidence of events about which you have now become familiar. But the question: Why through the [Flying Midshipmen] and not the OZBOURN Association?? (I’ve attached a 1993 letter that might be of interest).

Without intruding in your personal business, I wonder how you ended up in the Black Shoe (an AFFECTIONATE connotation, please!!) Navy. I was always an aviator, but also always felt that duty in the Destroyer Navy would be a very attractive alternative. My ships-company duty was always in the carrier Air Dept, either on the flight deck as a Shooter or in the Tower supervising the close-in air operations. On many, many instances, I would be engrossed in the maneuvering and rough weather survival of the DDs in the screen or in the plane guard position. When we were taking green water over the bow, I could only imagine what you guys were experiencing. So, it wasn’t just the first-hand knowledge of the life-saving value of the DD and crew upon which I based my fascination with destroyers.

As to your F4U-5N duty, that is another area of interest! Given the situation of the times, I surmise that you were a member of VC-3 and the Night Heckler crowd; surely a bunch of crazies, if any!! On the cruise where OZ picked me up, the VC-3 Det shared the ready-room with a sister squadron and I did not get to know the bunch very well. Lcdr Ed Dankworth was OinC, and of the four others (Lt Turkington, Lt Melton, Lt Ramsey, Ltjg Hayes & Ltjg Maegli), Maegli is the only one whom I seem to recall – because of his encounter with Tilly on a night recovery, maybe? On the next time out, the Det shared our ready-room and was lead by a real wild-man named Smith. (Don’t have a cruise book for that trip to fill in the rest of the names). It was on the second cruise that our skipper ditched (F4U) in Wonsan Bay on Friday the Thirteenth 1952, not quite a year after your jump-out in the same area. Although OZ did not pluck him out of the bay, it did ferry him back to the carrier later that day. And, then later on in August, OZ rescued all those guys who jumped for safety when we had the fire in BOXER.

Probably won’t make the [Flying Midshipmen] reunion, nor that of OZBOURN either, this year, but maybe next time.

Enclosed is a copy of a letter I wrote in 1988. Mr. Clark had asked for submission of “coincidences” experienced by military people during their stint in the service. it will serve your purpose, I think, without the necessity of me re-writing it. My computer does NOT include an Arial 11 Bold - it only has even numbers and neither the 10 nor the 12 seemed a good match!! However, I have also enclosed a disc with the letter to Clark, along with those you already have. if you are using a PC with Microsoft Works for Windows you might be able to grab what you want and apply the font you require on a print-out. Incidentally, I never heard a word from Clark; so any use he made of this incident cannot be considered “exclusive” by him.

With regard to the BOXER fire, there isn’t much to tell! It started in the morning, and as a fully qualified JO, I was doing what was expected – sleeping! I was in the Junior Officers bunk room in the very forward part of the ship when the 1MC blared out: “FIRE! Fire on the hangar deck, all hands man your fire stations”. Because the normal place for me to go was the ready room, and that was aft (about amid-ships) I decided that the prudent thing for a sleeping JO to do was to call the squadron duty officer and offer information as to my whereabouts. To my utter surprise, the SDO responded sharply with the admonition to stay away from the ready room – it was full of smoke!

With this bit of intelligence, I went out to the weather deck and observed that we were sure enough on fire!! To be serious, at that stage in my career it was better to stay out of the way until you could give a hand without danger of contributing to the crisis. As a result, I got involved in jettisoning machine gun ammo that had been loaded in aircraft on the flight deck. Later, the hangar deck officer collared me and had me start up an F4U spotted in the hangar in an endeavor to evacuate some of the smoke that was in the hangar bays. By the way, the fire started when a 20mm round was accidentally discharged from an F4U-5n; the round struck the wing-tip fuel tank of an F9F and exploded. Several persons jumped over board to escape the fire and USS OZBOURN rescued some of them. We lost something like 23 people to the fire; and I learned an indelible lesson regarding fires at sea.