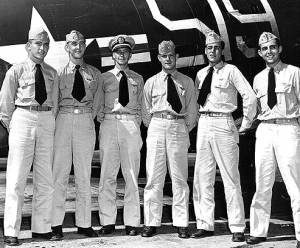 Many thanks for the 15-48 picture & data on the class. It’s the first listing I’ve seen that identifies the single & multi-engine pilots. Nice to know you were in CAG 3 on the LEYTE. Ken Beckman & Porter Clemens & (Kirkpatrick – Class 16-48 - not in picture) were in VA-15 at JAX & Bennie, Mac Dowell, Joe Sherin and Joe Speiser [not on your list]. (I have picture of us all except Bennie, who was flying). We all got our commissions the same day. Shortly after Clemans, Kirkpatrick, & Speiser & Sherin left for other squadrons. Sherin went to VA-45 then to 175. Don’t know were Speiser & Kirkpatrick went. Nice to know Clemens & Beckman were with you on the LEYTE. Would like to know more about your Korean cruise.

P.S.  The other Crowe on your list - 1st name was DALE. He was my room-mate for a while. He told me h had had a date with Liz Taylor when in college. Don’t know what happened to him.

Joe Dupnik & I both finished up at RPI on 6/56. He worked for Sikorsky Helicopter Division of United A/C. He & wife Mary lived in Trumble, Conn. He was a rising star in that Div. He went on a Co.. trip to N.J. - I think Bell Tel. Lab., came home with a terrible headache & fever. They treated him for symptoms. The next day worse - went to hospital - died encephalitis. What a loss. He flew P2Vs with Jim Halle. We visited Mary a couple of years ago - stayed overnight on our way to Cape Cod.

met by his parents & aunt

Reported for duty  Attack Squadron Fifteen (VA-15) together with 8 other Flying Midshipmen:

6/24/1950      North Korea invades South Korea - Korean War starts Pilots in separation stage (and there were many) for
discharge were frozen and reassigned. A new Carrier Air Group  formed - the ADM Holloway Flying Midshipmen
Program provided the  new pilots for the Korean War. THE USS LEYTE which had been in the MED was recalled to
Norfolk - resupplied with a new air group pilots and sent to Korea. Air Group 7 from NAS Quonset Point, R. I., also sent
a little later.Air Group 1 will go to the MED.

– No entries for the month of July but I’m sure we were flying, bombing & rocket training hops with great intensity. VF-11 & 12

– Skipper Lacouture loved tail chases. There were many. Also we   had Air Group exercises - Night Flying & FCLP hops as well.

1/20                Flew in SNB to Havanna with LCDR Red Nelson, Bill Kostik, & Bill
Quarg, Dan Dayton & Conley. Rest of squadron went to San Juan
with Skipper. They were not   allowed in Caribbe Hilton without jackets

3/30/51           2 more search hops heading for Gibralter. It was during this period that Skipper
Lacouture commented on LT Sullivan’s response was “At least I didn’t break the
tail wheel” referring to the Skipper’s hard landing of a few days earlier. Skipper
exclaimed, Sullivan - “10 days in hack for that remark.” After two days in hack reading
Playboy magazine while the rest of us were dragging with 3 hops/day Sullivan was called
out of hack & placed on flight schedule.

7/20/51           No fly. Ralph nearly skidded off deck while coming out of arrested
landing onto #2 elevator. Banged up flaps & prop. They tried to blame
it on Ralph for taxiing too fast but  the Admiral’s endorsement noted that
there was an earlier oil spill onto the elevator which caused the plane to skid.

8/3          Flew 1 search hop. Pilots located in raft about 1400. They had been
on instrument chase hop and tuned in ships freq. Which it turns out was
1 KC away from Tel Aviv  station which was much stronger so  they flew away
from carrier till out of fuel.

8/24        I got a stand by for boat duty - probably Ralph or Charlie met
Janet at Eden Roc. Went swimming & later had dinner. She & her
girlfriend had to pack then took her to   train station.

11/15/51      Ralph & I depart JAX on leave for Norfolk. I rammed Ralph’s new
Chev into car ahead at traffic light in Folstar Ga. Charlie brought my
Pontiac up so we could continue. Charlie Folkston got Ralph’s radiator
fixed next day.

7/1/52             CAPT. McCaffrey stopped the ship and sounded swim call
on ships 1 mc. The #2 elevator lowered & about 200 - 300 nuts
jumped off (me included). A long way  down. Water was wonderful.
Very soon we were aft by the fantail & swimming to stay abreast.
The ship was coasting still. The whale boat was full & kept having to
pick up stragglers. A second jump off the elevator was enough.

returned to the ship O. K.

8/14              We invite 3 RAF pilots to dinner aboard USS WASP.
They invite us to “Grog” party (rum) at Takali Field.
They are a “Right Bully Bunch.” After drinking beer for a while
they broke out the scotch & with ice cubes too. [following from a letter to Lois]
Later they broke out what they call “Lightning Flash.” It’s a 10" fire cracker -
very much like a   3" gun. After throwing around a couple in the club,
the Commandant of the base arrived & closed the bar so we piled into
their cars & headed for the Phoencia Bar (best hotel in Malta).
There were 10 of us Yanks & 20 of the Brits. After a few more
drinks & a few more lightning flashes thrown in the bar area the
Police arrived & everyone was thrown out. They went on to other
bars & after I went back to the ship. We invited 3 RAF pilots out
the ship for dinner the next evening. We had roast pork. Really
good. They said that would be a whole weeks ration for them.

8/23                Anchored in Palermo this AM. Had an all pilots meeting last night.
XO “Fox” Noonan said that all pilots must be in Ready Room by
0800 & anyone who is late would get the SDO duty. The Skipper
promptly stated we will muster 0830 & no one will get the SDO duty as
punishment. The XO withdrew his remarks.

9/1                  Depart TARANTO, Italy steaming for Gibralter to meet & be relieved
by USS LEYTE. Robert “Bo” Macmillan got a terrible hair cut.
They butchered him. John Ashby got out electric razor, scissors,
and a sheet and tried to trim up the rough edges. Poor Bo he didn’t have anything to lose.

Rendezvous with [USS] FDR. USS WRIGHT & others of 2nd Fleet

on the deck to Denmark.

10 JAN 53     All over again starting with shake down on U.S.S. Champlain to Cuba. Boarded at Mayport, Fla.