One for One is Not a Fair Trade 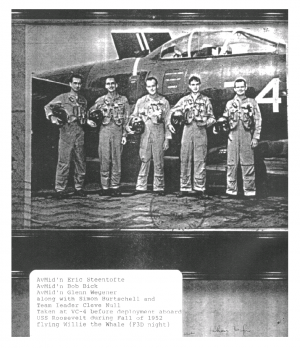 The F3D-2 Skynight was the first true all-weather jet fighter the Navy had. It had a maximum speed of 428 knots, but usually patrolled at about 340 knots. Since mid-1951 the F3D had been working up at MCAS El Toro [California], and in June 1952, a detachment of 15 was assigned to VMF(N)-513 at Kusan, Korea (K-8).  Flying night combat air patrol (NCAP), B-29 escort, and barrier patrol, the Night-fighter war was for the most part fought by the Marines.

By June 1953, the MiGs had started playing a new game with the Night-fighter forces. Relying upon their excellent GCI control out of Antung, a MiG formation of four aircraft would take off from Antung or any of the other major MiG fields and would orbit, waiting for the moment to pounce on an F3D or a [USAF] F-94. When Antung search radars picked up a patrolling night fighter (e.g., an F3D), jammers tried to break its communications with friendly GCI stations. One of the MiGs would then be vectored to position itself directly in font of the Skynight, tantalizing the crew by flying just fast enough to encourage a tail chase. As the Skynight picked up the MiG on its search radar and closed toward gun range, the other three MiGs, which were flying low to minimize their chance of detection by airborne or ground radar, would suddenly pop up, vectored by the Communist GCI. They would climb swiftly and close rapidly from the rear to catch the F3D by surprise. Oddly this leading “bait” MiG would often flash a blinking strobe. Was this to attract the F3Ds and F-94s as a flame attracts moths? Or was it perhaps a beacon for the following MiGs, indicating that an F3D sat on a straight course between them and the light? If a Skynight crew was not paying much attention to its tail warning radar as it should, the MiGs could close and score.

The F3D had one disadvantage as a night fighter. The F3D looked like two blazing stove pipes moving through the air. The J34 jet engine had a very short length from its hot turbine to its exhaust nozzle, and thus its exhaust glowed merrily and was visible at eight miles. (In Nam in the mid-1960s, Marine Skynights, now designated EF-10Bs and used for night EMF protection, accompanied night intruder missions, its exhausts still glowing brightly to the wonderment of accompanying participants. Plus ca change.)

In addition, the MiG, in the words of LT Gerry O’Rourke, skipper of VC-4 Detachment 44N, “could go faster straight up than we (F3D) could go straight down.” The one strength the F3D had: its lateral control. They could evade by rolling over on their back, pulling aft stick, diving downwards in a split-S, then doing a series of vertical diving rolls. Such maneuvers, in instruments-only flying conditions, are best left to the imagination. 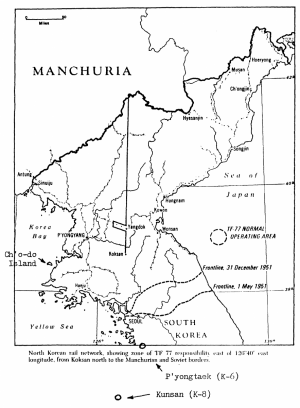 The detachment operated over the west coast near Sinuiju, conducting bomber escort and NCAP missions. Before the armistice brought a halt to its activity, it completed 12 bomber escort and 30 NCAP missions resulting in 55 radar contacts with enemy fighters, one victory, and, unfortunately, the loss of one of its own.

One of the most aggressive and keen airmen was LTjg Bob Bick. Determined to “get a MiG,” Bick left for a Ch’o-do Island NCAP on the night of July 2. There, 12 miles north of the Island, Bick found his MiG -- and three others. It is likely that he decided to press on, hoping to blast the bait MiG before his pals got within range. Listeners heard Bick radio that he had shot down the MiG, followed by, “The red balls are streaming by,” and then – nothing. Bick and radar operator ATC L. C. Smith never returned to P’yongtaek.

Fellow detachment pilot Glenn Wegener [16-48] has a slightly different version: “I made two extended cruises (Med) as well as two Gitmo excursions flying Willie the Whale [F3D] with Bob Bick. The first was with Eric Steentofte [18-48] on the USS Roosevelt (CVA-41) in the fall of 1952. The final extended cruise was aboard the Fighting Lady (USS Leyte) that departed Jacksonville (Mayport) Florida and steamed through the Suez Canal to Korea. 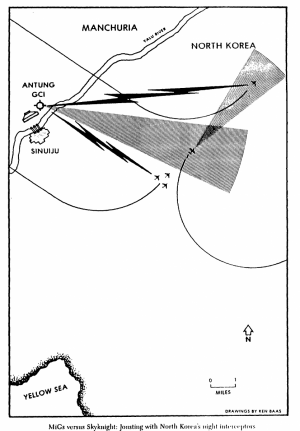 “While in Korea we were directed to go to the Marine Night Fighter Squadron (VFN-513) ashore on the west coast of Korea south of Seoul. It was in this squadron that former AvMid’n Bob Bick was on a night mission escorting B-29s from Okinawa that a MiG shot Bob down. The war ended several weeks later.”2