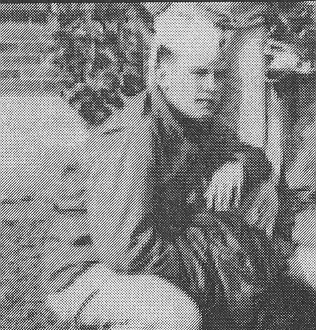 RUSS BAUM was one of the most un­usual people I had met in the Program. He was outgoing, brash and, above all, one of the guys. He was a lover of wide repute and considered himself to be, not only God's gift to the fairer sex, but one of the world's great aviators. (As I mentioned in my bio, Russ and Bill Rankin and I aced field carrier land­ing practice and were added ahead of sched­ule to the list of those to qualify aboard the carrier, U.S.S. Wright.

We were back at Main Side basking in our collective carrier landing success when the subject of Advanced Training came up. As I recall it was my suggestion that, since no one in the previous class had been assigned to fighters, we go over to the office and make a last minute change. Why not request attack aircraft? At least we would be flying single engine planes and not those lumbering multi engine machines. And so we did!

The result was a disaster. Rankin and Baum were assigned PBMs, patrol flying boats, and I went to Corpus to train in four engine pa­trol bombers, the PB4Y-2 Privateer. We were devastated by the news, and were in total envy of our three Basic Training flight mates, Bud Smith, Don Toby and AI Weil. Such was fate, but we didn't realize how our deci­sion was to affect the lives of all of us.

I believe that Russ finished his Navy ca­reer flying PBMs. He then went to work for the Martin Marietta Company. Some­time later he became their chief test pilot for the P5M, the next generation of Navy flying boat.

I lost track of Russ until I read an ar­ticle in Time Magazine recounting his he­roic exploits while training a Braniff pilot to fly the Boeing 707. According to the article, Russ had described the "Dutch roll" … kicking hard rudder which increased lift dramatically on one wing and reduced lift on the other. As advertised, when at­tempted the 707 started a violent roll. Russ assumed the controls and completed a bar­rel roll. In the process all four engines parted company.

Again, according to the article, Russ was able to glide the plane to a clearing … but not quite. The three observers in the tail of the plane survived, but the Braniff pilot and Russ were killed instantly. Later when the official accident report came out, Russ lost his hero status, but to many of us he will always be "some kind of hero."

PROBABLY A MORE ACCURATE VERSION OF THE ACCIDENT:

I know a great deal about how Russ Baum got killed. It's quite a sea story. I met an FAA Check Pilot in Tokyo who was aboard the 707 and was the only survivor.

Russ was checking out a foreign pilot in a new 707 when the aircraft stalled and did a snap roll causing three engines to separate from the airplane. The FAA guy went back into the cabin to check for damage. He re­ported back that the wing was on fire and begged Russ to ditch in a lake below which was their only chance to survive. Russ said that there was an airfield over the next ridge and he was going to land the airplane. The FAA guy knew they couldn't clear the ridge on one engine so locked himself in a head in the back of the cabin. The aircraft hit the ridge, exploded and the tail with the FAA guy rolled down the other side of the moun­tain.

I wrote about this some years ago and be­lieve I sent a copy to Ort [Rudd]. If you like, I will try to find my old copy and send it to you if you will send me your Fax number or ad­dress.