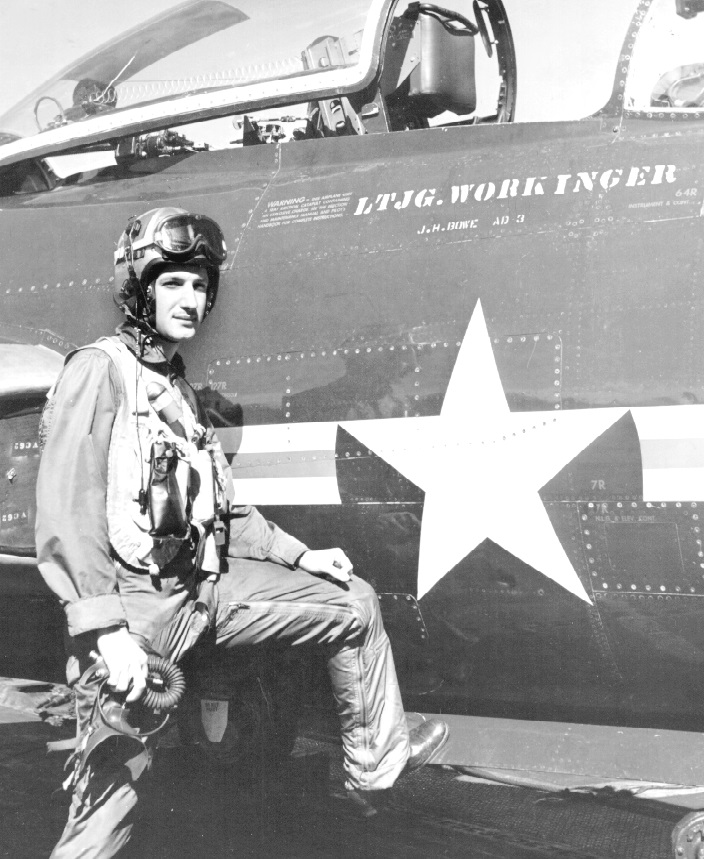 Many of us Flying Midshipmen left active duty after Korea and completed our twenty or more years in the Ready Reserves. Below is an article you may use or edit if you wish.

Since I was a Reserve LTjg I requested release form active duty in June, 1953. I was delighted to find that NAS Glenview was still flying Bearcats and Corsairs; but soon we were transitioning to F9F Cougars. Seven years later we were given the beautiful FJ4B, but had to turn them in after a couple of years because of reduced wing life. Last came the A4s. One of the greatest thrills of my life was requalifying on an Essex class (LEX) after 15 years. Of course they had changed the approach and added a runway, but we had a lot of fun with the LSOs by asking for RadFac charts and when do we get the SLANT or HIGH DIP? (My Exec had last qualified in an SNJ twenty years past). Two of us former Midshipmen got a chance to fly in a couple of air shows with the AIR BARONS, the NAVAL AIR RESERVE Flight Demonstration Team. Jules [Julian] Hanson [10-46] and myself acted as substitute wingmen in the 1967 to 1970 era.

P.S. Lou, if want more added to the article:

We were just getting the hang of being Fighter Pilots – qualifying in aerial gunnery (especially overhead runs) mandatory beer musters, group gropes on Friday – when KOREA broke out. Our Section Leader and instructor was an "old JG" named Gene Tillerson (20-47).

The five newest carrier qualified Bearcat pilots of VF-12 were notified we were being transferred to VC-62, the photo squadron servicing all the carriers. All our friends in Air Group One immediately informed us we were going to be Camerakazis and greeted us by calling out Click-Click.

John Farrell (13-48), Val Palmer (16-48), and myself were delighted to find they left two 20 mm in the F8F-2Ps, and the Sixth Fleet thought so much of our four plane detachment that they made us fly high cover for the gas-tank laden Corsairs and ADs. We managed to get 73 carrier landings apiece without an accident on the Oriskany. One month I logged 55.7 hours from the "boat" including one 5.0 flight searching for two Banshee pilots who got lost and ditched successfully. 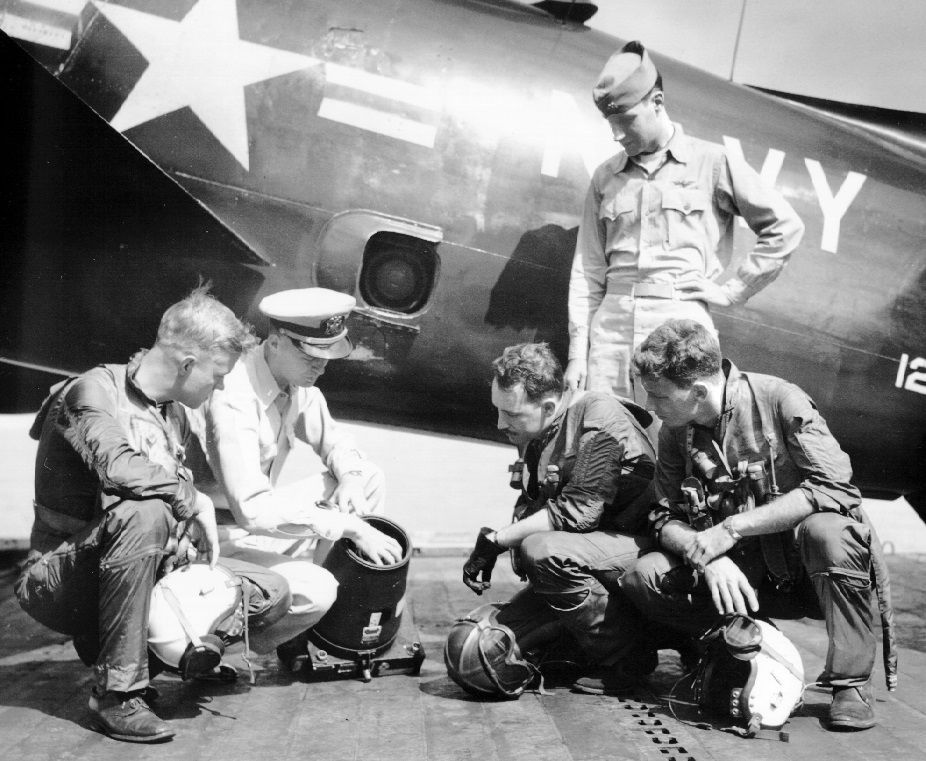 Sorry it took so long to get back to you; I have been running back and forth between Illinois and Tucson a lot lately. [The] Pima Air Museum in Tucson (where I volunteer as a docent each winter) has an exhibit showing pictures and histories of the first black civilian and military aviators. I noticed there were no pictures or reference to Naval Aviation, so I took action to get some pictures and printed material for the "Arizona Aerospace Foundation" to get posted. It is a great organization but it is mostly run by Air Force guys who don't realize that we have a Navy too! They have the information now and I will check to see how long it takes for them to reserve a section for Naval Aviation.

In reference to the photograph I sent to Lou [Ives] showing the Photo Detachment pilots from VC-62 on board the Oriskany in 1951, I think I still have the original photo at home. I believe the pilots shown from left to right are: Ens Valfrid E. Palmer (16-48) (in flight gear), LTjg Robert L. Morgan (OIC), LTjg Arthur B. Bliesener (in flight gear), Ens Thomas G. Workinger (17-48) (standing), and Ens John R. Farrell (13-48) (in flight gear?).

I also have pictures I can send you from our 1952 Mediterranian cruise with myself and Ens Norman L. Gearhart (19-49) (along with our Officer in Charge, LT James Peddy.) Norm Gearhart probably has pictures from his 1953 Korean cruise.

Here are some answers to the questionnaire:

I was a Senior in high school when I told a Navy recruiter I wanted to join the Navy Radar Program. The Chief recommended that I finish High School and was I interested in flying? I said YES, I had built model airplanes; then he sent me up from Indiana to Chicago to takes the exams and be sworn in as an Airman Apprentice in the Naval Aviation College Program.

I went to Purdue University for two years then reported to Pensacola in July, 1948.

I took Engineering the first year but transferred to Air Transportation Engineering the second year because there were 9000 GIs taking Engineering and I figured I would get a lot of college credits from the Navy in aviation courses.

I graduated from Purdue with a B.S. in Air Transportation in 1955 and joined United Air Lines as a pilot. 33 years later (1988) I retired from United. After going through Basic training in the SNJ, I was fortunate to draw one the few slots to fly the F8F Bearcat in Advanced Training. I was the only Midshipman in the flight with four officers.

After getting our wings May 4,1950; l was ordered to VF-12 in Jacksonville, FL. We Midshipmen were finally commissioned as Ensign USN in August, 1950. When Korea broke, John Farrell, Val Palmer and myself were ordered to VC-62, the Fighter Photo squadron at Norfolk. In March, 1951, the three of us found ourselves as photo/recon pilots on the USS Oriskany flying F8F-2Ps. A lot of our fellow former Aviation Midshipmen were on the two carriers in the Mediterranean flying Corsairs, Skyraiders, and Banshees.

In 1952, I was sent back to the Med. on the USS Wasp (CVA-18) (this time flying F2H-2P Banshees) with Norm Gearhart as the junior pilot of our three pilot photo detachment. On this cruise I was promoted to Ltjg and notified that I was not selected for permanent USN. At this time we were frozen on active duty because of the Korean War; but when I requested release from active duty in 1953, it was accepted.

I returned to finish at Purdue and joined the Naval Air Reserve at NAS Glenview, IL.

During the eighteen years in the Naval Air Reserve, I flew F8F Bearcats, F4U-5 Corsairs, F9F-6, -7, -8 Cougars, FJ-4B Fury-2s, and A4-A, -B, -C, -L Skyhawks. I served one two year tour as Commanding Officer of the VA-8 A4 Squadron deploying out of NAS Glenview. I was promoted to Captain USNR and served two more years in a non-flying and non-pay billet at Glenview before retiring in 1972.

I married a Chicago-area girl in 1956 and have a son and a daughter who have two sons each. When my grandsons ask what I did in the war, I tell them I fought the Battle of the French Riviera. (Those Bikinis were fierce.)

Thanks for all your hard work!
Tom Workinger 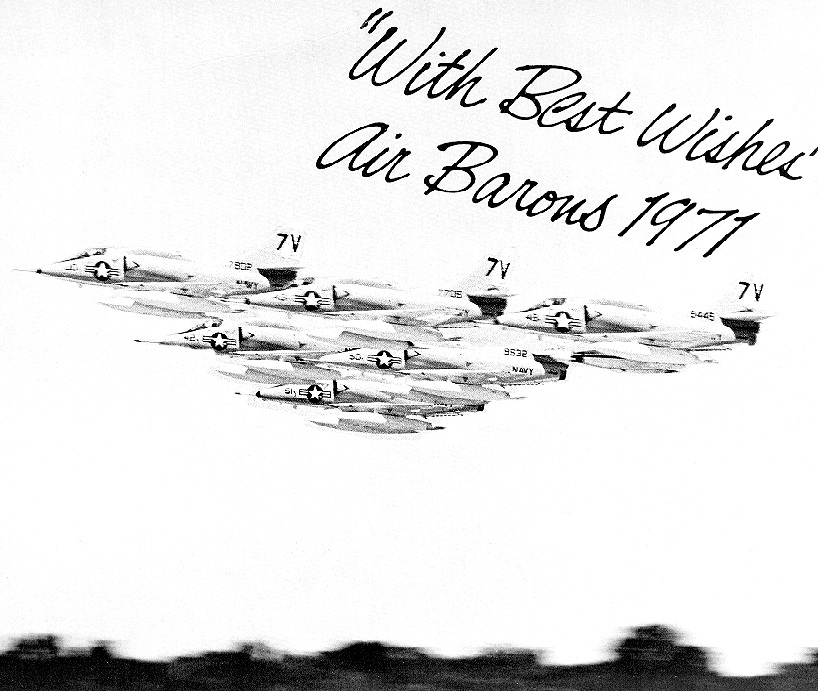