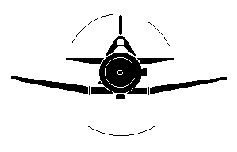 I’m sorry that I couldn’t get back to you to answer your questions about the Smithsonian after you read about it in the Southern Aviator. At the time I had a very ill wife and a deadline on my new book so everything else took a back seat. Then I misplaced your letter so that’s it. I guess it’s 4 and 2 for me.

I am enclosing what material I have. I have written a Congressman or two and some publications like Southern Aviator but received very little response or interest. I believe the people to get it to for some action is Sen. John McCain (RADM Ret.) R - Arizona and Cong. Randy Cunningham (R - Calif. -- they are both U.S.N. types).

This whole thing is a sad state of affairs and portends what our country will turn into someday. You can get the rest of the info from the enclosed articles & info. The person who put me on to this and who is actively working on it is Mrs. Chuckie Hospers in Ft. Worth. (They have a B-17 named “Chuckie.”) Although Congress has recently approved a Museum Annex at Dulles, the “barn full of old airplanes” syndrome remains. Also the problem is with the overall director of the Smithsonian. Dismantling of the great Museum of Science and Industry is a disgrace. Congress is not doing their job.

I will get to the BIO shortly. Have a good holiday.

P.S. They really need to get rid of this Adams guy.

Just when we thought the FAA balloon business and higher aviation fuel taxes were our greatest worries, out pops another one.

It appears that the very fiber of our aviation heritage is under attack. Mr. Robert Adams, secretary of the Smithsonian, looks upon museums as forums for “confrontation, experimentation, and debate.” This means they must be politically correct. The fact that I will not be able to take my grandchildren to that wonderful Museum of Arts and Industries on the mall in Washington, DC, is bad enough - but now the Air and Space museum is under attack.

Mr. Adams refers to the NASM as a “barn full of old airplanes” and refers to our warbirds as instruments of destruction. Instead of a testimony to America’s greatness, and the skill and bravery of young Americans, they are now to be portrayed in a less than favorable light.

The Board of Regents has negated their responsibility and willfully allowed Public Law 722 to be violated. These people are not only violating the law and misusing public funds, but they have violated the public trust. They should all be dismissed before more damage is done. The deeper I delve into this, the worse it gets. It’s disgusting, and Congress should be made to sort it out.

The Southern Aviator: Mr. Ohlrich sent considerable documentary information. The Arts and Industries Museum on the Mall will be replaced by the African-American Museum. Although the primary mission of the NASM is to collect, preserve, and display historic aviation artifacts, only 15 of 350 full-time employees are directly involved in the restoration and preservation of these artifacts - and only three to four percent of the total budget is spent on restoration. Plans also apparently call for the deletion of the general aviation gallery. - Ed.

Noted your offer to become a life member [in the FMA] for $90.00. Who could pass up a good deal like that? Payment enclosed.