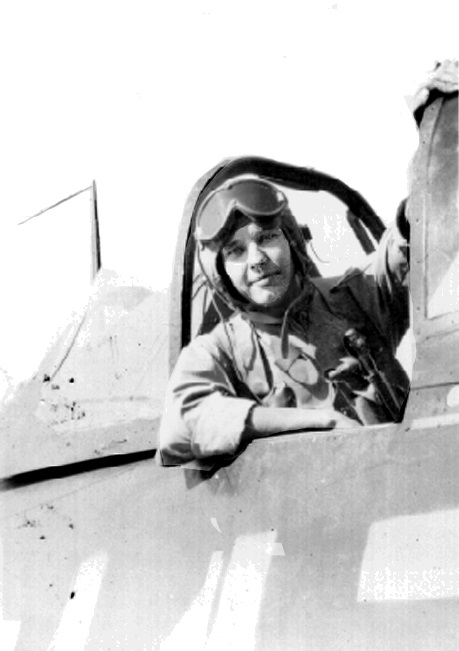 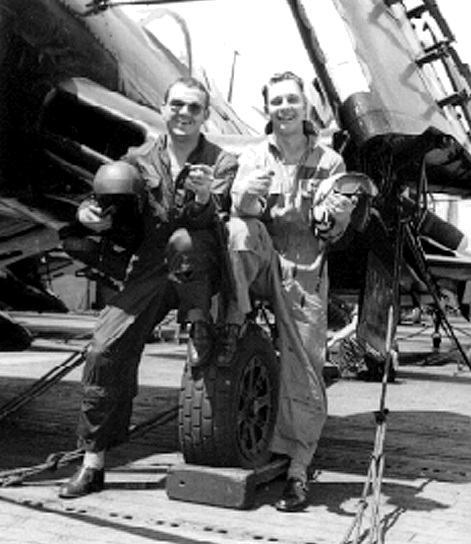 Narrative of a transcription previously given to John [Ed] Weems. It follows the topical outline of the handwritten pages [earlier given to Pat Francis].

William H. Koenig. Born Des Moines, Iowa, May 24, 1926. Attended public schools through High School in that city. High School sports were swimming and tennis, but the consuming interest was aviation. During High School senior year, enlisted as a naval aviation cadet in the V-5 program. Chose Naval aviation because of its fine reputation, and the desire to fly Corsairs from a carrier. Began active duty March 1944. A surplus of Naval aviation cadets at that time caused all incoming V-5ers to be transferred to the V-12 college program; subsequently chose the V-12 ROTC program because it offered the best preparation for a regular commission. Was commissioned from the University of Oklahoma in May 1946.

May 1946 to May 1947 sailed in USS Rogers (DDR-876). April 1947 was awarded commission in regular United States Navy. May 1947 to May 1948, sailed in PCE-884, a weather patrol ship operating in the Pacific and based in Guam. Applied for flight training and was accepted, reporting to Pensacola, July, 1948. Enjoyed all aspects of flight school. Met Tom Hudner, again, while at Whiting Field, where we were both going through A B flight stages. In the spring 1949, sat for the professional examination to determine promotion to Lieutenant, jg. Our year group was the first to do so. The exams had been discontinued during World War II. For advanced training, requested the fighter syllabus, and was selected. Began flying the F4U Corsair in September 1949 at Cabaniss Field, Texas – it was a dream come true. Promoted to Lieutenant, jg, in November 1949 and at that time also completed advanced training. Designated a Naval Aviator in January 1950 and reported to VF-32 at Quonset Point, Rhode Island, in 1950. At my welcoming interview with the Squadron Commanding Officer, he showed a bit of poorly concealed disappointment. Many LTjg aviators would have had 1000 hours of flight time and possibly World War II combat. I was fresh caught with 300 hours in the blue. Tom Hudner had recently been assigned to VF-32, and he also fell into the same category.

I met Jesse Brown in the course of checking into the squadron. I was not surprised when we met, because I had seen a picture of Jesse in late 1949 edition of the “Naval Aviation News.”

In physical appearance, Jesse was lean and athletic in build. He was quiet, a bit on the serious side, easy to talk with, and pleasant to be in company with. His performance in the air and on the ground was that of a competent aviator and officer. The fact that he had become the first Black Naval aviator was almost overshadowed by the seeming ease with which he took his place in the squadron.

This underwhelming, to me, characterized the relationship between Jesse and his squadron mates.

About his being very religious – he often attended church and I would say that his daily life reflected the confidence of his belief.

VF-32, as part of Carrier Air Group 3, embarked in Leyte CV-32. Departed Quonset Point, Rhode Island, May 2, 1950 for a Mediterranean deployment as part of the 6th Fleet. In the squadron organization, Jess, Tom, and I flew with the Executive Officer, Lieutenant Commander R. L. Cevoli. Tom was Dick Cevoli’s wingman, Jess was the section leader, and I was Jess’s wingman. We kept this tactical organization for the Mediterranean deployment and during the Korean operation.

While in the Med., I did not share any shore leave with Jess. He spent his time with his contemporaries, all of whom lived in “Boy’s Town,” that is the Junior Officer’s bunk room. Tom and I occasionally went ashore together, but there was nothing spectacular to recall.

During the summer of 1950, Jess and his year group were screened for permanent USN status. Not one of the year group in our air group was selected for permanent status. Collectively, we were shocked, particularly with respect to Jesse not making the selection. You will recall that this was a most austere time.

In August 1950, Leyte was detached from the 6th Fleet and made a hurry-up trip to Norfolk, Virginia, to prepare for duty with the Pacific Fleet.

We received five new pilots in the squadron, and this brought about new room assignments aboard ship. Jesse moved out of the bunkroom and joined LT  jg Bob Schabacker (VA-35) and me in a stateroom. It was a compatible group and we enjoyed each other’s company.

En route to Japan, we spent much time picking the brains of those who had experienced Word War II combat. Tom, Jess, and I frequently talked about what we thought we would encounter. At one combat briefing, I remember that the squadron CO, D. T. Neill, strongly emphasized that if one of us was shot down, the others were to provide cover as best possible, but there was to be no Hollywood-type rescue attempt that might well result in an additional loss.

Leyte joined the 7th Fleet October 9, 1950 and launched combat strikes on the 10th to support the UN ground forces moving into Wonsan. At this point, UN forces were beginning to steamroller north, having crossed the 38th parallel; the only slowdown being the amphibious landing at Wonsan which ran afoul of a heavily mined harbor.

Our missions more frequently became armed reconnaissance instead of close air support. We were now operating deep into North Korean territory. And I suppose it’s possible that some flights may have come close to crossing the Manchurian border. Apparently, for this reason, we received a directive to cut off the area on our charts to the north of a line that was south of the Manchurian border. As the offensive moved to the Yalu River, we had to tape the top part of the charts together again. The deeper we operated into North Korea, the more intense the ground fire became. On one flight, as the strike group broke out under the overcast, we immediately came under intense fire. One shell burst very close behind us and that was the first time that Jesse or I had heard the noise of an exploding AA round meant for us. He immediately detached our section. We dove for the deck, and went on our assigned reconnaissance route. In November, the air group made a number of coordinated strikes with the Air Force against the Yalu River bridges. The Chinese troops had come into the war, and everything soon would be turned around.

By the first of December, we were flying close air support for the Marines who were fighting their way south from the Chosin Reservoir. For the flight on December 4th, I did not fly my usual position. George Hudson, our LSO, was flying Jesse’s wing in my place. And I was leading another section with Ralph McQueen as my wingman. The flight launched early afternoon, and we were working in the Chosin area. I was following astern of the Exec’s division and as we flew up a valley, I noticed a stream of vapor coming from Jesse’s plane. By way of explanation, in the Corsair, when transferring fuel from an external tank, the automatic shut-off valve sometime would not close, and fuel would be dumped overboard. I called Jess and told him that he was dumping fuel. As we pulled up to clear a ridge, he transmitted that he was losing power and going to have to put down. I didn’t see him make the landing. The terrain was far from level, and we were flying at a very low air speed; so he didn’t have much time to set up for ground contact, but he made the best of a lousy set of conditions. We then set up a defensive orbit over the crash site. The flight leader, Dick Cevoli, called for a rescue helicopter. At this latitude and in the month of December, darkness comes early. We could see signs of fire in the nose of Jesse’s airplane. In the Corsair, the 230 gallon fuel tank is located just forward of the cockpit. It was painfully obvious that any successful rescue attempt would have to start now. I felt, as I’m sure others did, that the only immediate help for Jesse would have to come from one of us, and one man made the decision. Tom Hudner transmitted that he was landing. He did a good a good job of putting his Corsair down. We watched him go to Jesse’s plane and then go to his plane and radioed to us that Jesse was pinned in the cockpit, that he was alive, and “had all the faith in the world and that’s what counts.” As we orbited, watching for enemy troops and watching Tom’s efforts to fight an incipient fire with snow, I recall my feeling that it would be like Tom to go down and help.

Marine Lieutenant Charlie Ward from VMO-6, brought his helo down fairly close to the crash site, and he, with Tom, worked in a futile attempt to free Jesse. For us, fuel was becoming a consideration and as daylight ended we left the site. My wingman, Ralph McQueen, and I landed at the Marine base at Yon Po where we spent the night as guests of Marine Aviation. The next day, the Marines flew Tom to Yon Po and the two of us had a chance to talk briefly. In his usual quiet way, Tom expressed sadness and disappointment at the outcome, and was a bit apprehensive as to how his decision to crash land would be received by his superiors. 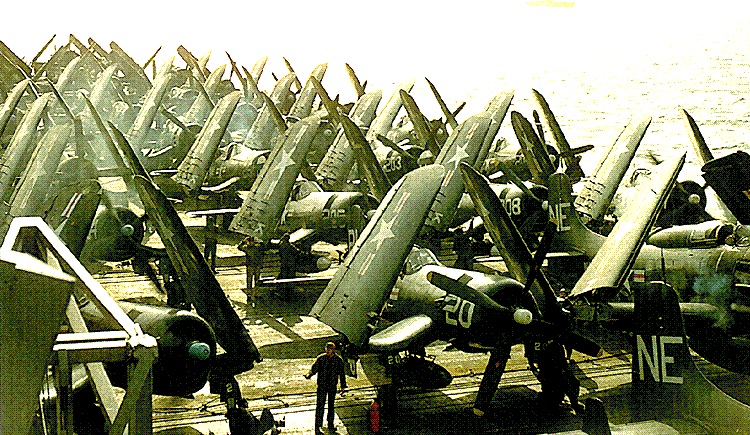 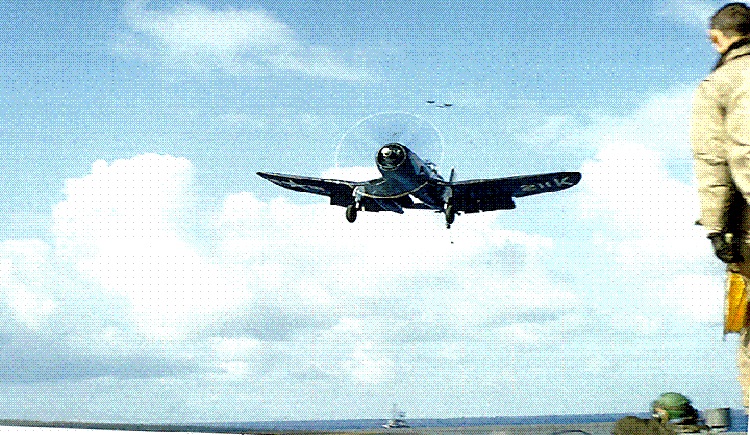 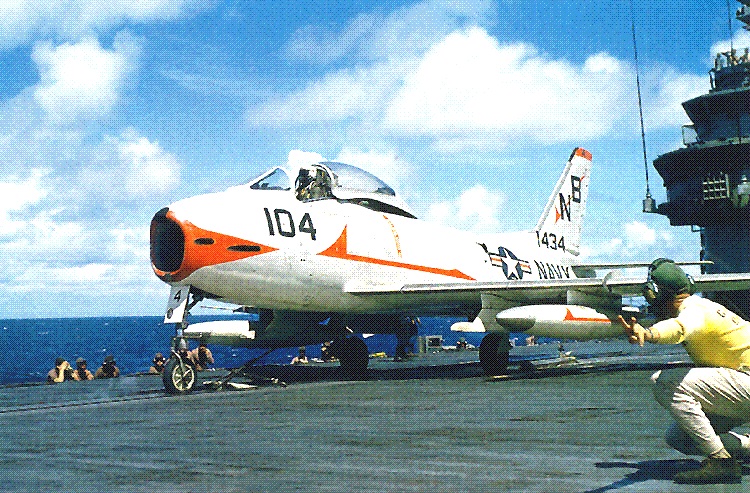 Pilot’s approach and landing were satisfactory.

As tail hook engaged arresting wire, the flight deck pitched downward. Aircraft became airborne on the wire and veered to the right, colliding with the ship’s smoke stack.

Operation: Provide air support to a UNMC unit engaged in evaluation of equipment and tactics in cold weather environment. 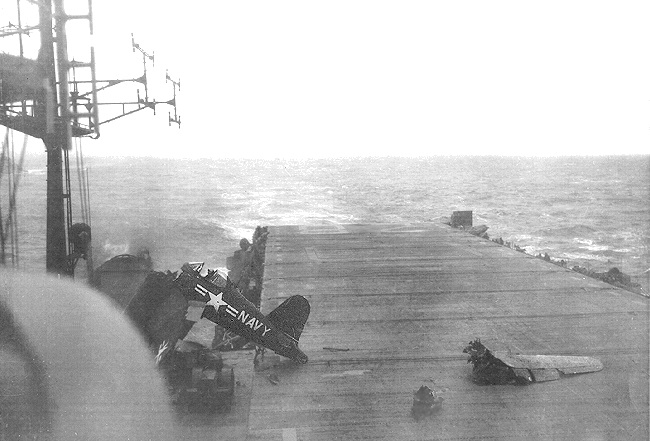 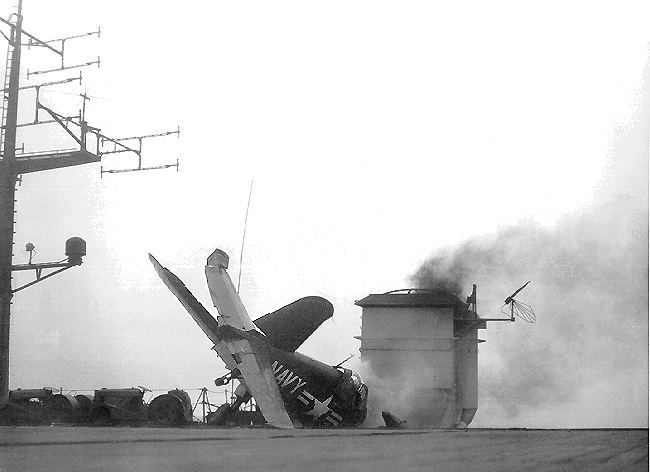 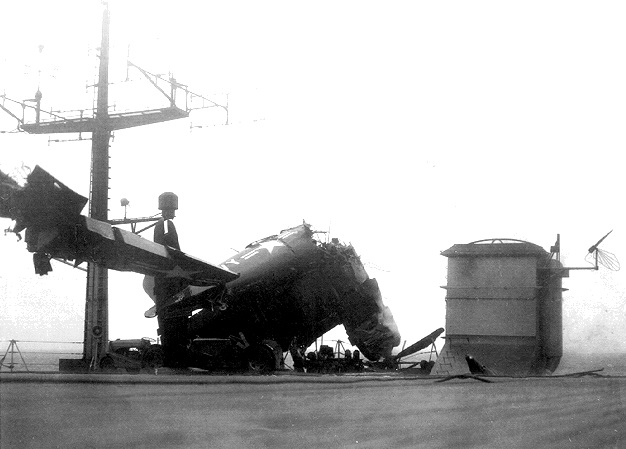 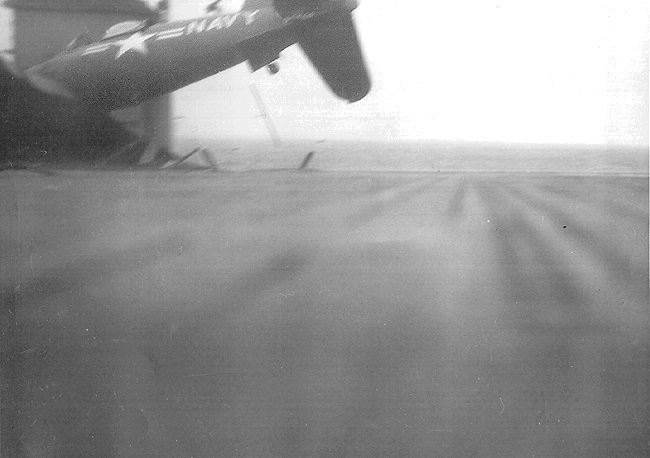 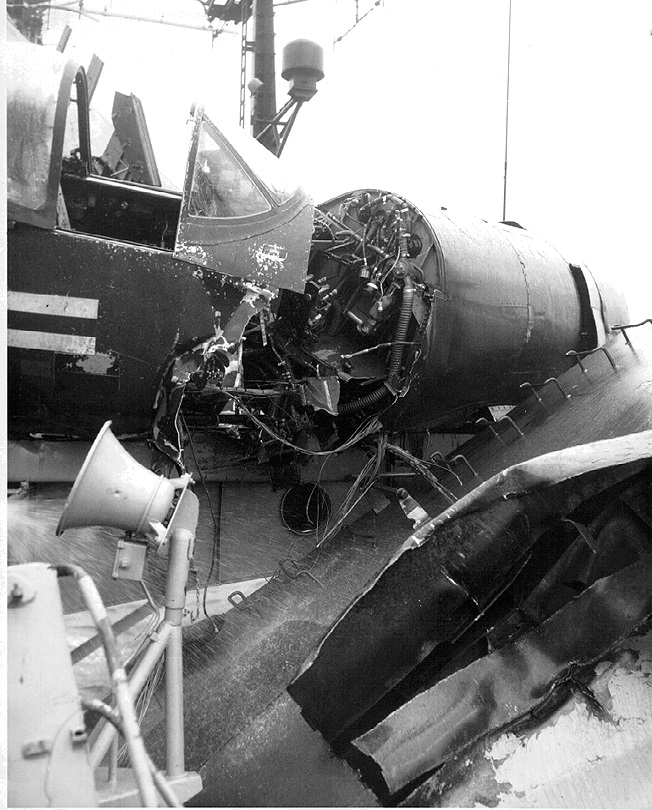