“There’s No Such Thing as a Typical Flight in Alaska”

If there is one thing typical about flying in Alaska it is that there is no such thing as a typical flight in Alaska. This is the story of one such flight.

Over the years I have forgotten both the plane com­mander and the co-pilot's names. Yours truly was the navigator.

We were on the last leg of a four day, four leg fam flight around Alaska including stops in Anchorage, Fairbanks, Nome, and a return to Kodiak.

The flight from Nome to Kodiak that afternoon was at a minimum altitude of 10,000 feet to clear the mountains of the Alaska Peninsula. With about an hour remaining until we landed at Kodiak, we ran into the first weather of the entire trip. The outside air temperature was close to 0°C so, in anticipation of possible icing conditions, the pilot turned on the anti-icing heaters which heated the leading edges of the wings, stabilizer, and vertical fin.

We ran into icing as soon as we entered the cloud formation. Although light at first, within seconds it be­came heavier and, as the ice melted on the leading edge of the wing, it ran back and froze on the rocket rails and flight surfaces. It built up on the leading edge of the engine cowls so much and so fast that the props were shaving it off with each revolution and there was a rapid, intermittent drumming on the side of the fuselage as ice was thrown from the props. Ice build-up on the radome blocked any forward scan and ice on the RDF housing rendered it useless. Other radios and electronics were degraded as the antennas iced up. Within a short time the pilot was forced to continuously add power to main­tain altitude. Fortunately the pitot heaters and carburetor heat worked as advertised.

Eventually, the plane became so loaded with ice that the pilot could no longer maintain altitude and I, the navigator, had no idea where we were other than the fact that we were on an easterly heading. The next ten or fif­teen minutes were probably the longest of our lives. The pilot ordered the crew to crash stations, although I don't think anyone had any expectation of surviving a crash on the peninsula. By the judicious use of alcohol and wipers, the pilots had managed to keep the windshield reasonably clear. Why they bothered, I don't know as visibility appeared to be something less than zero. The highest peak on the peninsula is about 7700 feet and as the altimeter unwound through 9000 and then 8500 things started to get very tense. Then, as the altimeter passed through 8000 feet, we broke out of the cloud base, daylight flooded the plane, and we saw that we had crossed the peninsula and were over water (Shelikat Strait) and only a short distance from Kodiak. As we made our letdown and approach to the airfield, the ice melted almost as rapidly as it had formed, but after we landed and post-flighted the plane, we noted we still had over six inches of ice built up on the nose, as well as vestiges of ice on the rocket rails and other parts of the plane.

At the time I thought I had escaped with my bravado intact, but apparently not. For the rest of my career, until I retired some 20 years later, I went out of my way when flying to avoid icing conditions - even a snowflake. 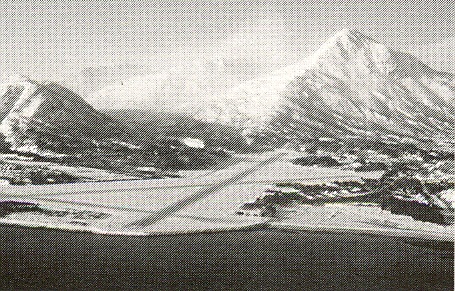