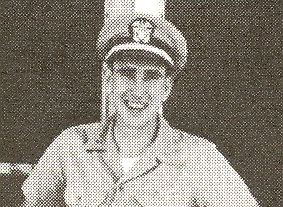 (The following excerpts are from AI Hauge's rec­ollections NOTHING VENTIJRED--NOTHING GAINED of his Navy life between June, 1948 and when he was released from active duty in December 1951.) … One of a random series of Flying Midship­men profIles.

Summer, 1948. Navy orders awaited me on completion of my second year at St. Olaf College in NorthfIeld, Minnesota. I was to proceed on the 26th of June by train to Pensacola for flight training. That was some train ride! Three days and two nights mostly banging around in various freight yards. The first night we went 80 miles to Austin, MN and I actually had time to go uptown and take in a movie. We floated across rivers by barge and jerked the rest of the way. We finally arrived in Pensacola coming in backwards for the last 40 miles since the train would not be able to turn around in Pensacola.

I walked uptown and checked into the San Carlos Hotel. I had two days before I was to report in … they had allowed for an even SLOWER train. That evening I met a young waitress named Kitty who 'guessed' I was there for flight training. She had to work that evening but the next day she showed me the town. I told her that I would like to date her when I had leave and she encouraged me to do so … what I didn't know was that it would be six weeks before they would let me off the base. When I did make it back to town, Kitty was nowhere to be found. (Pensacola previously had a lot of young damsels who wanted to find a Navy pilot for a husband … unlike Aviation Cadets before us, Midshipmen had to sign an agreement not to marry until after commissioning as an Ensign … most of the young ladies left when they heard that news.)

(After completing flight training and receiving Navy wings, AI was assigned to Patrol Squadron One at Whidbey Island, WA, flying P2Vs.) Korean Wars starts … ! was on leave still in the Seattle area with the idea of touring the state of Washington. I called in to find out what was happening and was told to return to the squadron immediately. All squadron personnel got their shots and preparations were made to deploy to an unknown destination. I called my dad, He and my sister, Marjorie, flew to Seat­tle from Minnesota to drive my new car back home.

We flew to San Francisco as the first leg of our trip; the next morning, all nine squadron planes de­parted and navigated singly for the next stop … Barber's Point, Hawaii. The first part of the flight was in early morning darkness. The navigators (I was one) were supposed to take a couple of star shots to check their proficiency. One star in the east was very bright and easy to acquire with the bubble oc­tant but would not 'compute.' Later I found out that the "bright star" in the east was the landing lights of the plane behind us … they had forgotten to turn them off.

We got a night on the town in Honolulu so a group of us descended on DON THE BEACH­COMBER'S for a fancy supper. The most expensive item on the menu was "planked steak." We all ordered that since we didn't know when we would be able to 'dine out'. It was a beautiful steak (I wasn't used to spending that kind of money for a meal). I sat there a few minutes appreciating the smell and sight of the serving, when all of a sudden "plunk!" … a chameleon fell from the overhead grass roof and landed smack dab in middle of my steak where it lay wiggling in the hot grease. "Yuk!" The waiter offered to get me another steak but I could just imagine what they would do … take it to the kitchen, brush off the cha­meleon and bring it back to me … I went hun­gry.

The next leg of the trip was to a desolate, for­lorn place called Kwajalein Island. They had to clear the runway before each plane landed by chasing the gooney birds off with a jeep that had a wide boom mounted on it. I went to the Officers' Club, a Quonset hut with my oth­er crew officers and went in right behind my PPC, Patrol Plane Commander, a loud bell rang … I didn't get my hat off quick enough. Everybody got FREE drinks on me; my Mid­shipmen pay was really skimpy … I was left flat broke!

On the next leg, we headed to Guam where we were told of our final destination--Naha, Okinawa which was an Air Force base. When we landed at Naha, we blew a tire … Nice start! We were blocking the one runway. The rest of our squadron planes had to divert to another Air Force base there, Kadena … they made it in to Naha the next day.

The day following our arrival, we flew our first patrol through the East China Sea. This went on for the next six months.

Our first housing was for the 'birds' and the meals weren't much better … there were C­-Rations and K-Rations left over from WW II. The milk was powdered and tasted like coconut oil … or worse. After about a week, four of us managed to move into a Quonset hut in the Air Force dependent area. This was pretty nice … we had a kitchen, refrigerator, dining room and almost private bedrooms. And we were able to hire two Okinawan girls to keep house and wash our clothes. It cost us $5.40 per month for each girl … they had to walk over a mile each way to do our housekeeping chores.

We soon found a way to better meals … get acquainted with an Air Force officer's housewife who had commissary privileges … this would mean fresh fruit, vegetables and other goodies.

I volunteered to do the 'acquainting'; I picked a quarters Quonset at random and knocked on the door … this very pretty housewife appeared. I started off, " We are part of the Navy Unit based on the other end of the field " and stopped. She stared at me … I stared at her. "I know you," she said; I agreed the same. We couldn't immediately come up with where we knew each other from and started naming times and places. We discovered that she was from Worthington, MN and I was from Jackson, MN where I played basketball against her hometown team. "You are the Jackson basketball player I had a date with one night." She was a cheer­leader and I had asked her for a date during a game time-out. After the game a couple of us drove back to have a "coke" date with her and another cheer-leader. (Coke definitely being the liquid, refreshing kind back then.) I mentioned that I had noticed another guy sitting nearby in another booth who appeared very interested … she said he was now her husband and a pilot in the Air Force. I met him later and we all laughed at our memories and the coincidence of the meeting … WE GOT ALL THE GRO­CERIES WE WANTED!

It was too good to last, the skipper and the Exec found out about our setup and took our Quonset for themselves … RHIP!

We often attended Saturday evening dances at the 51st Fighter Wing Officers' Club at Naha … the wives had been there before the Ko­rean War started and just stayed on. All of us guys wore khaki shirts and pants without a tie so unless you looked closely at the collar insig­nia there was little difference … we all looked pretty much alike. One Saturday night, several of us Navy types got the bright idea of wearing our 'whites' … which we had been required to tote along. We came up with the story that we were just off the aircraft carrier, USS United States. That was a carrier that had started to 'build' and congress had killed … there was no USS United States. We walked into the club in those 'smart' dress whites … we were bought drinks … the Air Force officers offered their wives to dance with us … we had a GREAT time. Our C.O. and X.O. were there but luckily did not give us away. The following Saturday night we were again at the club, dressed in the usual khaki and heard the comments … "You should have been here last Saturday night; we enter­tained a group from the aircraft carrier United States and did we have a party!" No one had recognized us.

On leaving the Navy … My contract to serve in the Navy had been for five years. I fig­ured that I was in for the duration; however, af­ter the six months tour on Okinawa flying pa­trols in the East China Sea, we returned to Whidbey Island. In early December, 1951 my Commanding Officer read "morning orders" in which he stated that anyone with 50 or more combat missions (I had racked up 54.) could be released to inactive duty--I took him up on it. Other Midshipmen who wanted to make a ca­reer of the Navy had to apply for retention. I "signed out" on December 5th and was really ea­ger to get home to Jackson, Minnesota … so I drove straight through; the whole 2,100 miles.

I left Whidbey on a Monday morning; got to Jackson at 2 p.m. on Wednesday; dad was gone for the day; had a bite to eat and told my moth­er that was going to lie down for a nap … when I woke up I was surprised at how bright the sky was … it was Thursday!

Much later, I realized that my C.O. had made a mistake in letting me go to inactive duty … all of us Flying Midshipmen were supposed to be "frozen" for the duration … which should have been until the summer of 1953 (by then I was married and had resigned my commission). I did fly with the Naval Reserve Unit in Minne­apolis while I attended the University of Minne­sota. I received full pay as a Lieutenant junior grade with flight pay!