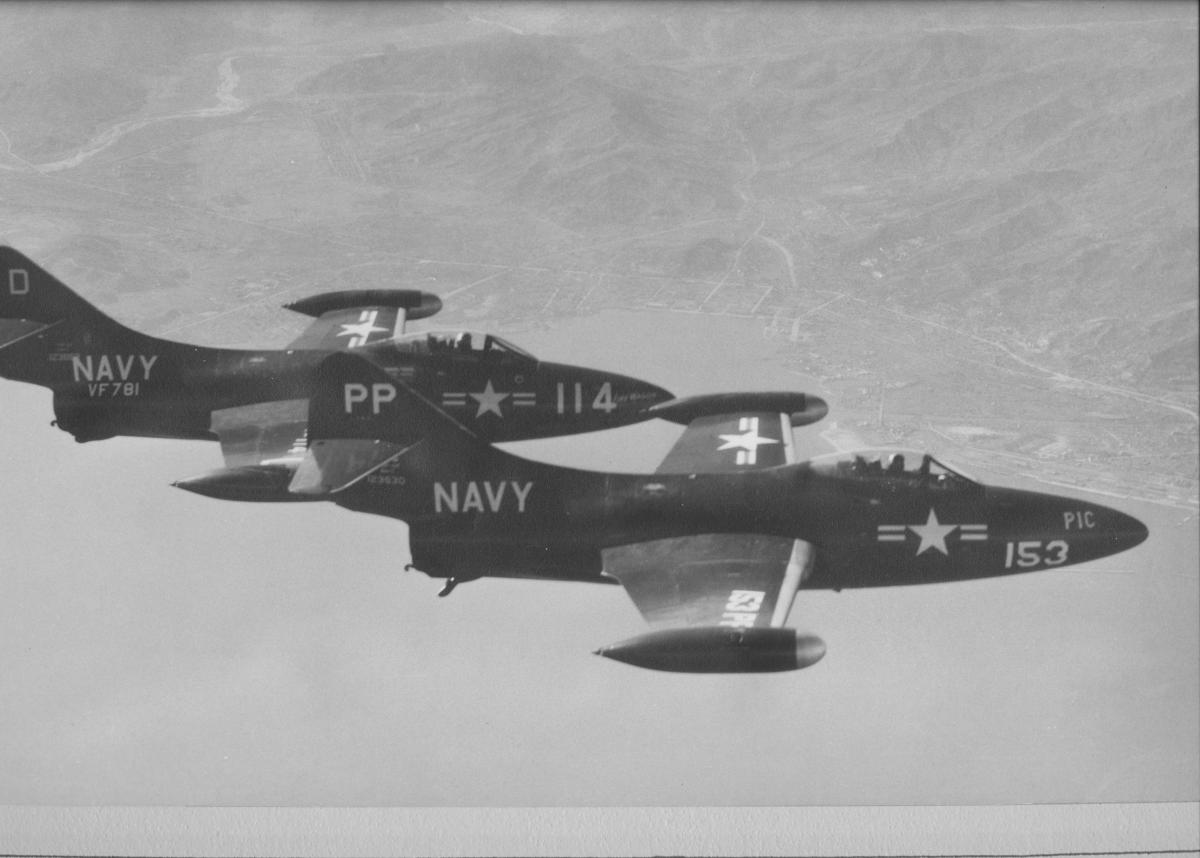 In late 1950, the first U.S. Navy let photo reconnaissance aircraft were created by modifying F9F-2 fighters. The four 20mm cannon were removed from the nose, and replaced with a two­position mount for a WWII-era K series aerial camera. Heavy lead weights were added to maintain proper balance. The sliding nose cone was modified by patching the four gun ports, and cutting two clear plastic "windows"; one opened straight down for vertical photography, the other out the port side for obliques. The camera was mounted on the ground in either the vertical or oblique position, and could not be moved in flight. While they were at it, they removed the underwing rocket rail mounts and the now-useless gunsight from the cockpit. The end result was a Panther that was a bit slicker than the fighter, with a tiny bit more speed and little less fuel consumption. The down side was that the only pilot controls for the camera were an on-off switch, and an interval switch to select manual photos (by pressing the leftover gun trigger on the control stick}, or interval photos from 3 to 30 seconds.

When we flew combat photo missions in Korea, we normally flew in company with an armed fighter. He was not only company, but could provide protection in case we were ever lumped by enemy aircraft (this never happened on the 1951 cruise). Occasionally, the fighter could make a strafing run to suppress ground fire, making things a bit safer for the photo pilot. Some of the fighter pilots enjoyed this easy mission, others disliked them because they were usually boring. The photo pilot had the lead, while the often-senior escort pilot flew wing. Often, when we got back to the carrier, we switched, because the fighter was usually lower on fuel than the photo plane.

Photo missions were usually scheduled the night before by the unseen Intelligence Officers who planned such things. When the mission assignment was received, the assigned photo pilot went to work. Almost all photo recon required photographs with a 50-55 percent overlap, to allow for stereo photo interpretation. An altitude was usually assigned in the mission plan, so the photo pilot's planning had to include basic high school-level geometry and trigonometry to plan speed and photo interval. We each had our personal function table handbooks on permanent loan from the ship's library.

There were a few "standard" types of missions. The simplest was to fly to a particular grid location, and take repeated oblique photos of a town, an installation, a rail yard, etc. We flew in a circle around the target, at a constant speed and bank angle, taking pictures at the planned interval. Of course, the low altitudes and the steady speed and bank angle made things pretty easy for the enemy ground troops, who seemed to enjoy using us for target practice. Fortunately, the F9F was notorious for its ability to take many small arms hits with seldom a hit that caused any damage beyond funny noises.

Pre- and Post-strike missions were interesting. The photo plane and his escort would dash into the planned target just a minute or so before the main strike group, and quickly shoot many photos of the target area. Then we would pull up out of the way while fighters and attack planes did their thing as we watched the show from above. When they were done, we rushed back down and record the damage, then sped back to the carrier, trying to beat the rest of the flight home. This was not just a "need for speed"; the photo interpreters wanted to develop the film by the time the flight was debriefed.

The most demanding type of photo mission, from the standpoint of aerial photo skills, was route mapping. We would be assigned a length of road or railroad, usually 50 to 100 miles in length, and take precision vertical photographs of the route. Precise 50-55 percent overlap was required, and, to insure maximum side coverage, each photo should line up with its neighbor. Not too difficult if the road or rail line was straight, but that did not exist in the mountainous terrain of northeast Korea. This means that at each time the camera fired, the photo plane must be exactly wings level. As the camera fired at set intervals, the planes airspeed must be constant. In between the timed photos, we had to bank vertically to see the ground and adjust heading as needed for the next shot. The fighter escort would usually fly in a spread position, jinking as necessary. All he could do was report when the flak started getting too close. Contrary to what we see in war movies, a flak burst in front of you can be seen, but is gone when you reach it. A flak burst in back of you cannot be seen (lust as you can't see your own contrails in your mirrors).

While the above three types of photo mission were the most common. The occasional "other" types of missions were often the most interesting. One such mission that I still remember took place in the summer of 1951. Our carrier, the Bon Homme Richard, was operating much farther north than usual. I got a mission to fly up north to the Yalu River, turn east, and photograph "anything of interest". I and the escort were the only jets on this launch, and a soon as we got airborne my escort developed a surging engine, and chose to land immediately. As this was planned to be an easy "milk run," I said I would go it alone; nobody on the radio tried to talk me out of it.

So I flew at high altitude up to the Yalu, turned right and descended to a thousand feet, keeping well on the south side of the river. For the first hundred miles or so I saw nothing of interest. I took the occasional oblique photo of landmarks, just to prove I had been there. Then I saw something of real interest. There was a brand-new concrete airstrip right on the north bank of the river, in Chinese territory. It was so new that the ends of the white concrete runway were not yet marked with the black streaks left by the tires of landing aircraft. I turned on my camera at maximum interval (3 seconds), and flew past the field keeping just on the south, or Korean, side of the river. I counted 18 swept-wing jets, either Mig-15s or the new Mig-17s.

As I could detect no ground fire, I made a quick right-hand racetrack pattern to come into another photo run. Still no activity on the ground, although it seemed that a few of the Migs had moved. I did another circle for a third pass, and on this one I noted three Migs in vee formation making a 3-plane section takeoff. Spectacular! It suddenly dawned on me that they might just be planning to come after me. I turned right into a convenient southbound valley between high mountains, and went full throttle at treetop level, keeping a wary eye in my rear view mirrors. After 50 miles or so I couldn't keep wasting fuel at this low level, high speed, so I zoomed up high and coasted home to the ship, arriving just as it turned into the wind, and I landed with 500 pounds of fuel remaining.

My photos were great, although they disappeared that same afternoon on a TBM COD,2 heading I know not where. In debriefing I was sworn to secrecy, so I only told my team leader, who only told skipper Collie Oveland or CAG Hal Funk (or maybe both).