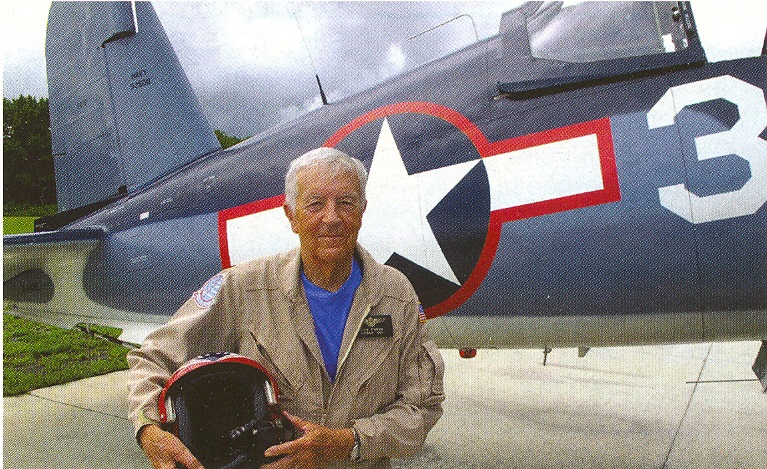 The following remarks are based on a Wings of Gold interview with CDR “O’Bie” O’Brien, USN (Ret), a veteran Naval Aviator who, at the age of 81, is a featured flier at the Military Aviation Museum specializing in the Museum’s FG-1D Corsair.

I graduated from High School in June 1946 and joined the Navy the next month as an apprentice seaman in the Holloway V-5 Midshipman program. Spent two boring years at Villanova College. Reported to Pensacola for flight training in July 1948 and was designated a Naval Aviator in the summer of 1950. I retired July 1st 1976 (29 yrs, 11 months and 12 days.)

I reported to VF-44 at Cecil Field September 1950 flying Corsairs and made two Mediterranean cruises plus one combat deployment to Korea. CDR, later VADM, Bill Houser was our skipper for the second Med and Korean cruises. I flew 29 combat missions, earned two air medals, and remained in VF-44 until September 1954. I’ve logged over 7,000 flight hours including 1,125 in the Corsair plus 625 traps on 20 different carriers with 214 of those traps in the Corsair.

Never had any trouble with the FAA physical and get one every year however I worry over each one!

If anyone has had any more time in the Corsair, I’m not aware of it, but I would be reluctant to claim that title. I’m quite sure I’m the most seasoned (and oldest) pilot currently flying the bird and the only one still flying it who flew it in a combat environment. I’ll be 82 next February.

At the Military Air Museum I truly enjoy sharing my love of aviation and aviation history with the visitors from the youngest to the most senior. I particularly enjoy it when I get the opportunity to fly for the guests and let then experience the sights and sounds of living history.

I started flying with the Fighter Factory Museum in 2001 and am qualified in 10 of the aircraft, the main ones being the Corsair, the TBM, the AD-4 and, of course, the tried and true SNJ.

I first flew the corsair in October 1950; my last Navy F4U sortie was in 1953. My first civilian Corsair flight was in 2003. That’s 50 years between flights. Happily, I continue to fly the wonderful fighter – 59 years later and counting.