“Here I am in my garden in California reading the LOG, and raising palm trees, red flowers and tail hooks.

“I was in Pre-flight at Chapel Hill and St. Mary’s some many years ago ! 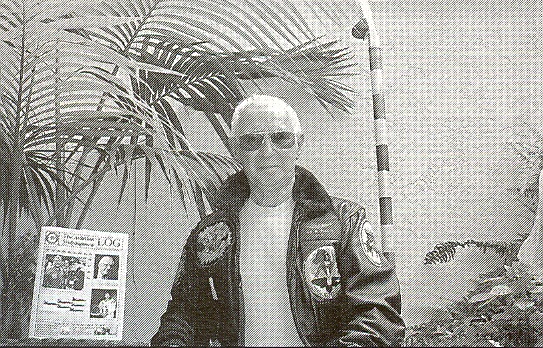 The Scene: On board an Escort Carrier, USS Mindoro (CVE 120), in Fighter Squadron 3E, cruising in warm Caribbean waters, half way between Havana, Cuba and Key West, Florida. It's a beautiful day.

The Mission: Fighter Director practice to intercept an inbound bogey. Hank and I are now on two different radio frequen­cies. He will be the Bogey, and I will intercept. I'm "SMILE 107".

The Date of this Exercise: Winter 1948

It was my buddy Hank Malloy down there today, but tomorrow, or even next year it could be a real bad guy inbound to my Aircraft Carrier. The enjoyable feeling was the confidence this Naval Aviator now had in his Aircraft, and in himself, that he could fly with the big boys now.

.Another joy was to look out through the canopy of your fighter at the incredibly blue sky ... and if you look up at the sun you see the "silver ship upon the silver sea." And they paid us to be there!

Hank Malloy was my roommate and was killed in the crash of an F6F Hellcat just before we were to be commissioned. I hope he's up in heaven reading this story and smiling ... on the next intercept Hank was the successful Fighter and I was the Bogey.