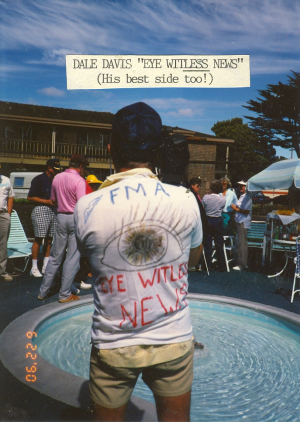 I’m Dale E. Davis--Dog Easy Davis--Middie.  My first [AvCad] number was 736-60-59 when I got in the V-5, and then 496637 was the Middie number and officer number.  Went in June of ’45.  Finished high school in the end of June and a couple of weeks later was at Occidental [College--Eagle Rock, CA].  Went to Occidental in L.A., Cal Tech, UCLA, been kicked out of the four best schools in California [transcriber:  what was the other?  High school?]

Then went to selective [flight] training in [NAS] Livermore [California].  Got there just as they stopped selective, so we tarmacked for about a month--I guess--then they sent us down to … oh, they made us AvCads there.  Then they sent us to Los Al [NAS Los Alamitos], we did our selective there, in the N2Ss--14 trips, then a solo.  Then after a month off, we went to [NAS] Ottumwa [Iowa Preflight], checked in there in the midnight of the 31st of December of ’46.  Started out … we became class of 1-47--January 1st of ’47.  Finished Preflight there.  Went to Corpus [NAS Corpus Christi, Texas].  Went through Primary, Basic--we were the first class, I guess, to start out in the SNJ without going through the N2S.  Actually, we spent about a month tarmacking there before we got into the training thing.  And they gave us a month of tarmacking, and then two, three weeks of leave and then we went into the training.  As I say, we started right out in the SNJ, skipping the N2S.  Had primary, basic, and instruments there.  Then Pensacola for formation, gunnery, FCLP, and qualified on the [USS] Wright {CVL-49] in April of ’48, with the six landings.  Then back to Corpus to encounter the PBMs.  They actually had a bunch of “Coasties” [Coast Guard] there--hooligans coming through the … they had just transferred the PBM training from [NAS] Banana River to Corpus.  So we went through the SNB checkout first—basic, then instrument work; then the PBMs.

The wings were issued on each Wednesday morning, so Monday—the 5th of August—that night we were supposed to have our final nav flight, have Tuesday off, then Wednesday morning get our wings.  Well, the weather was lousy in the Gulf, so they cancelled our flight Monday night.  Well, I didn’t want to stick around another week, so six o’clock in the morning, on Tuesday morning, I called the CO of the base, identified myself, and asked him if we went out that night on our final check, if we could possibly get our wings the next morning.  I guess I caught him off guard, ‘cause he said, “Oh, yes, fine.  I guess we could.”  So, we went out, finished our nav flight, got in bright and early Wednesday morning, showed up, got my wings; and when the skipper, who gave them out, heard my name, he suggested I check with my boss, in the ATU [Advanced Training Unit] there—said he had a little word for me—so I charged over, and yes, he did have some word.  He treated me sort of like a grenade with the pin out.  He couldn’t figure out why I had gone to the skipper of the base instead of to him.  Well, frankly, I had never even thought of him, I just went to the top.  But anyway, he gave me a bum fitness report, and I pressed off into the wild blue yonder.

Then I reported to the West coast, San Diego.  Went through ASW and radar school at [NAAS] Brown Field, then reported to VP-46 on Saipan.  Got there just before Christmas.  I was the second middie out there and they still didn’t know what to do with us—they finally decided we weren’t enlisted, so they wouldn’t put us in the Chief’s quarters; we … Warrants [Warrant officers]—that wasn’t quite the place for us … but since we were going to be officers in a couple of three months, they put us in the BOQ.  And, of course, they had no idea on how to pay us—per diem or pay or anything else.  Finally, after a month or so, we got the thing squared away.  That was home port, by the way—Saipan—at the time, for [VP] Forty-Six.  Then in June or July, August, maybe, we returned to San Diego, and they made San Diego our home port; cut out some of the squadrons.  We ended up three [squadrons] who rotated on the WesPac operations—spread out detachments all through the area.

I was released to inactive duty on the 30th of June [1950], just after the Korean thing started.  Went home and immediately started sending frantic telegrams and letters to the Navy Department to get recalled.  Civilian life scared the hell out of me.  After working for three months as an instrument installation mechanic for the Air Force, got a welcome set of orders, was recalled to active duty about 4½ months after I was released, and reported to San Diego.  Became an instructor in Fleet Air Wing Fourteen training unit there, until September of the next year--’51, when I reported to VP-832.  They had been recalled from Seattle, and they had a tour out and were regrouping for the next one.  Then we had a tour in … Sangley Point [PI] was our home port with detachments at Yokosuka, Buckner Bay, and Hong Kong, for S and R [search and rescue].

We went out in February or so, and got back in September of ’52.  Then I went to FASRon 8 at Alameda.  Entered their instrument training department in SNBs.  Then checked out in the T-bird [TV-2] and instructed in that for about a year and a half at Alameda and Moffett in FAWTraPac.  Then went to Beeville, Texas—Chase Field, just before Christmas ’54 to be an instructor in T-birds there.  As I was the only one who was current at the time, I spent all the Christmas Holidays checking out the various instructors who were transitioning from T-28s.  I was there until June of ’56, when I … the augmentation program specified that lieutenants senior to my date of lieutenant didn’t even bother trying to be augmented.

And figuring that the Navy might let me go right down the line a while, I went with TWA, and started with them May 28th of ’56, and ended up retiring in September 4th of ’87.  Thirty one … over 31 years.

In the Navy, I flew PBMs, and like any read-blooded seaplane pilot, I tried my best to find any buddy who flew anything with wheels on it.  So, through various friends, I managed to get time in TBMs, and F6s, and Corsairs, ADs and various things like that.  Then of course, once I got into the jets, I felt more comfortable.  And when I came out in TWA, I started out in the Martin [4-0-4]--a small twin-engine replacement for the DC-3, working up through the DC-4s, Connies—about seven or eight models of those—into the 880--the Convair 880 jet, then the 707—all those models, six or seven of those—finally into the [Lockheed]1011, and the 747; I finished up my career.

We now live in Punta Gorda, Florida, just a little north of Fort Myers on the west coast.  I still keep my flying up.  I bought in on a Barron.  With a couple of guys a couple of years ago, and now they’ve pulled out, so I’m a proud and wary owner of a Beech Barron B-55.

We have four youngsters—three girls and a boy.  A couple of them live in Long Island—the girls.  The oldest lives in Chattanooga.  The boy in Melbourne.  He’s a pilot—he’s not military.

I think that’s it.  I hope this gives some information.