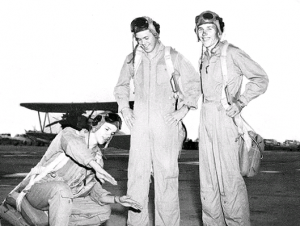 We took off from NAS JAX at twilight of a warm spring day in 1948. I was leading the 2nd division of four F6F Hellcats and our instructor, LT Len Johnston, was leading the 1st four. Johnston was a short, austere veteran of a year's combat in the Pacific who felt “wronged” at being brought back [to the] fleet to try to make real Naval aviators out of “... you bunch of plumbers.” Our night cross-country was aimed at Cocoa Beach about 150 miles down the coast; no landing, and return to JAX. As 2nd division leader, I had to keep my group about 25 feet below and 100 feet back to the right of the 1st four.

There was almost total cloud cover with lots of haze ... as promised ... a black and murky night. I edged in as close as the rules allowed but still strained to keep the lead group in sight. In my earphones, I could hear the “dit dah, dit dah, dit dah” of the south leg of the Jacksonville radio range, our aerial highway. As we flew on, I began to relax a bit and dropped back to a more comfortable distance from the flight leader.

The lights on the ground, at first isolated pinpoints, became more visible.  St. Augustine, a scattering of sparkling jewels, drifted by on my left. I looked for LT Johnston's formation and saw their lights ahead, but they appeared quite distant. Berating myself for having lagged so far behind, I inched up the throttle to catch up. I was not alarmed, but I did want to catch up before the Lieutenant noticed my absence. Pressing on for a few minutes, I still did not seem to gain on the planes ahead. Anxious now, I added more speed and leaned forward in my shoulder straps – eyes glued to the other formation's lights … and still not closing in. I was adding more power for the third time when Johnston's voice erupted in my ears. “Firebird Five from Firebird Leader, what is your position?”

“About five o'clock from you but I'm having trouble catching up. Over,” I replied.

“This is Firebird Leader. I'll turn left so you can cut inside me. Get back up here where I can keep you in sight."

I peered at the elusive lights but they did not start moving left. Suddenly it dawned on me … the group of lights I had been trying to catch up to were stars glimmering in a break in the overcast. All those stories about pilots trying to join up on car lights on the highway and water tower lights came back to haunt me. I had to let my leader know of my predicament.

“I seem to have lost sight of you, Firebird Leader.”

"A most shrewd observation,” he drawled, ignoring strict voice procedures.  “Now if I may trouble you to make another observation, take a look at the coast.”

“We'll join up again over the beacon just swinging in our direction … it should flash right about … now!” As he was speaking, I looked along the coast and could see several beacons at wide intervals. Just as he said “now” one of them flashed its beam in my eyes. I radioed that I had the beacon in sight and turned toward it. My flight arrived over the beacon … I searched the blackness in vain … we were alone. I had added another faux pax to those already made by picking the wrong beacon.

I looked to the north about 10 miles ... sigh of relief ... there, oh happy sight, was the other flight.

“Firebird Five rejoining the formation,” I called a few minutes later as we slid into formation.

“Firebird Leader, roger. All right, Firebird Flight we've had so much delay, we're heading directly back to JAX. Out.”

With trepidation, I flew back to base thinking of the tongue-lashing I was about to receive ... at the very least. The lights at JAX came into sight. After an exchange of transmissions, the tower cleared us to land. Apprehension had me by the throat. The Lieutenant started his approach following the flight's break over the runway. He made his turn onto final and lined up with the runway. Then two red flares bloomed in the air.

A cardinal sin in flying – failing to put your gear down! A special lookout at the approach end of the runway with a spotlight and flare pistol always monitored training flights back then. Had my screw-up caused this lapse in attention by our instructor?

In any event, when the Lieutenant ... who ended up landing last, walked into the hangar where we all waited for the post-flight debrief, he bade us a curt “Good Night” and headed straight for the locker room. The evening's events were never mentioned after that.

The roster of VA-214 that you sent along with your recent letter brings back some memories. I remember the CO, Riley – I believe he was only about 27 years old at the time, young for a LCDR. Clarke, McFarlan, Quarg, and Dewenter I also remember. Dewenter was a relatively small guy but an excellent boxer. Quarg used to have a girl friend named Madonna Johnson in Seattle. I noted a photo of him with his wife in the latest [Flying Midshipmen] newsletter. Strangely enough I still recall my serial number 0496288, although a lot of more recent stuff escapes me nowadays.

My first assignment after getting my wings and commission was to an all-fighter air group that was to be formed at NAS San Diego. This was a new concept at the time; we were to be flying F8Fs, the hottest navy fighter in those pre-jet days. As I recall, all the pilots were assigned, but the AG never got off the ground (forgive the pun) because of post WW II budget cuts. We sat around out there for several months, getting our flight time in F6Fs in order to qualify for flight pay, and passing the time attending anti-submarine warfare courses and other ground school stuff. The AG was finally abandoned, and that’s when I was assigned to VA-214 at NAS Seattle, flying TBMS. I hadn't been there more than a few months when that AG was decommissioned, again for budgetary reasons.

From there, I was sent back to JAX to join VA-135 which had just returned from a Med cruise and was going into a training cycle with a lot of new pilots assigned. While I was there we got brand new AD-4s; I flew one back to JAX from up north somewhere, probably Norfolk. AD-4s were great planes that performed almost like a fighter, a welcome change after the lumbering TBMS. I can't recall the name of the CO of VA-135, but I'm pretty sure the Exec was a LCDR named Niehaus. I can't remember the names of any others from that squadron, although I don't doubt that if I saw a roster it would jog my memory. I guess it must have been early or mid 1949 when I got to JAX, but then I left active service in January 1950, so I never got to know people there very well. I believe Mac Russell was also in AG-13 at the time, flying F4Us, and I did know Bob Neely and Walt Karbowski [Karr].

I took up my college studies in January 1950 as a second semester sophomore at the U. of Wisconsin, majoring in French. I think I told you in an earlier letter that I was a "weekend warrior," while in college, spending one weekend a month at NAS Glenview, near Chicago, flying F8Fs. I graduated with a BA in French in June 1952. The Korean war was going on during that time, but reserve pilots were being recalled to active duty only if, 1) they were unattached to a reserve squadron, or 2) if they were in an AG that was deemed "combat ready." The Glenview outfit I was in was far from being in the latter category, so I escaped going to Korea.

I wonder if you remember Bob Francoeur and Frank Duffy who were close friends of mine in the V-5 program and into pre-flight school at Ottumwa, IA. Bob was from Highland Park, IL, a suburb north of Chicago, and Frank was from Racine, WI. They both left the navy after pre-flight, so never went on to pilot training except for the few (± 10-12?) hours we all got in N2Ss at Livermore, CA as a sort of pre-pre-flight tour to weed out those who couldn't stand flying. I first soloed in a Stearman there at Livermore. In those days, after your first solo flight they cut your tie off 4 or 5 inches below the knot. Did you go through that, too?

But I digress. … I’d kept in touch with Francoeur over the years, and he had kept up with Duffey. Bob, who now lives in Los Angeles, called me several years ago and told me that Frank was quite ill with cancer in both lungs. He had been a smoker, but had given it up some years before. I flew out to L. A., and Bob and I drove up to San Francisco, where Frank lived, to see him. Frank was still able to get around, and we shared a couple of meals together and relived old times. Frank and I had been very close friends years ago; I believe I first met him and Bob when I was in a V-5 unit at Gustavus Adolphus College in St. Peter, MN, in 1945, just out of high school. Frank, as afflicted as he was, even insisted on showing me Muirs Woods in the S. F. area. A few months later he died, so I was grateful that I had a chance to say goodbye to him.

My wife, Hettie, and I attended a former aviation midshipmen's reunion in St. Augustine, FL, 4 or 5 years ago. The only people I knew there were John Reilly and his wife, Irene, who live at 9207 Sardis Forest Drive, Charlotte, NC 28270, and Diane Norman, Bob Norman's widow. Admiral Moorer, a former chairman of the joint chiefs of staff, was there, but for some inexplicable reason he didn't recognize me.

I think maybe you already know about Bob Ramsay (Robert E.), 600 Northern Way, Winter Springs, FL 32708-3872. He and I once hitchhiked cross- country together from San Diego. I peeled off somewhere south of Wisconsin and went on north to see my mother, and he went on east to wherever he came from in those days.

Well, enough already. Thanks for the kind words about my poems.

Don’t Buy for Me: Car Too Teeny©

Pilot of the nimble Bug,

when you risk it on the road,

low and rounded, trim and snug,

boxed by trucks with heavy load,

better have a grave plot paid

and your testament in hand

just in case a dimpled maid,

unaware of where you're at,

runs you down and stamps you flat.

if it doesn't make you bleed.

They say the primal seed hung there, suppressed,

comprising monstrous force not yet expressed,

aboil, but pent up, seemingly at rest.

Then all at once a BLAST! – who would have guessed? –

blew fragments to the north, south, east, and west

at speeds one hardly could conceive if pressed,

The pieces still rush off with zealous zest,

but those of us who held on tight are blessed

with Wal-marts, central heating and the rest,

As soon as NASA's engineers said when,

to float in airless space. I'll tell you why.

the joy he'd felt when young to "join the mirth

of sun-split clouds" and slip through freedom's gate.

and peered through windows opening on vast

sigh soft to nearby God as one drifts past.

And even had this proved John's last at-bat

could there have been more sweet farewell than that?