I’m Herb Sargent: Pre-flight Class 9-47, known as the Naughty-Niners (we probably averaged more demerits than any other class.)

Started at Ottumwa, Iowa on April 30, 1947. Ottumwa was deactivated on June 30, 1947 and Pre-flight school was moved to NAS Pensacola. All students were flown to Pensacola at the end of June, 1947.

I completed Pre-flight in the middle of August 1947. Previously all Pre-flight graduates were given 30 days leave and sent to Corpus Christi to begin basic flight training. Instead of leave, our class, 9-47, started a new program. We were sent to the USS Wright [CVL-49] for indoctrination. The Wright was the training carrier at Pensacola. After two weeks aboard, half the class detached and reported to NAS Corry Field to start “A” stage basic training in the SNJ. The other half of 9-47 reported to Corry Field two weeks later. The classes that followed 9-47 spent 4 weeks aboard the Wright before starting basic training. (It was interesting to note that 9-47 was not divided by class standing but was divided by demerit standing. Those with the least demerits started the first flight class at Corry Field).

I finished basic training in early summer (May or June) and went to NAS Jacksonville for advanced training in fighters. At that time JAX was losing quite a few F4U-4s (and students) due to spins. So they started a new program. We were given 30 hours in the F6F before switching over and going through the whole F4U fighter program. We spent a lot of time spinning the F6F. I guess it did not prove anything because that program did not last too long.

I, along with 7 others in my flight, were the last ones to be designated Naval Aviators at Jacksonville, Dec 16, 1948. All other students had been transferred by Dec. 1, 1948 to Corpus Christi to complete advanced training. 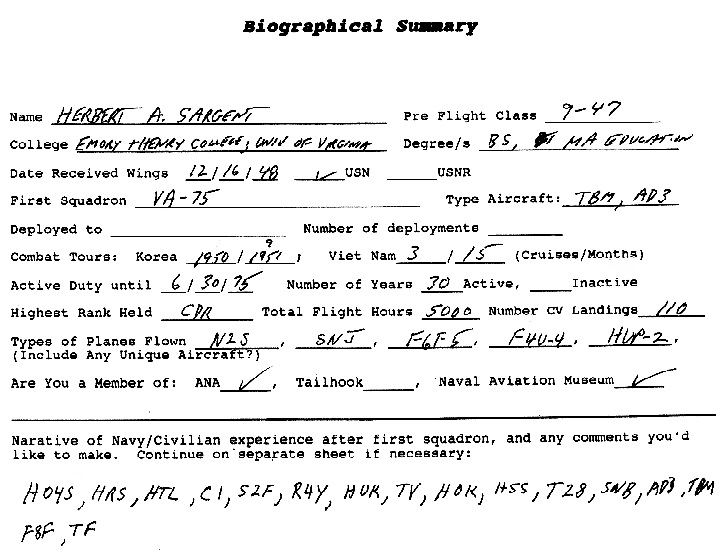 In 1946 the Aviation Midshipman Program was designed by Vice-Admiral Holloway, ChNavPers, and was referred to as the “Holloway Program.” It was to provide the U.S. Navy with an additional source of officers to augment the Naval Academy and the ROTC programs with regular officers vice reserve officers.

The Aviation Midshipman was commissioned as a regular officer and had to apply for retention as a regular officer. [Ed: This did not obtain for those early AvMid’n. The Bradley and Johnson purges of the late '49s and early '50s seemingly had no rules for the AvMid’n – fired.] Those selected for retention would remain on active duty and go back for two years of college at a college of their own choice. The non-selected would go to inactive duty and receive tuition and fees paid to a college of their choice and $100 a month while in college. [Ed: The first fired AvMid’n were denied this opportunity, and had to fight like hell to obtain their contracted rights of college. They finally persevered. The $100 was taxable income; G. I. Bill stipends were not.]

It was not promised, but it was anticipated that there would be a high retention rate of regular officers. The first group were designated Midshipmen in 1946 [December 16]. If they had already started flight training, they would receive their commission one year after designation as a Naval Aviator. Those who had not started flight training received their commissions two years from the start of pre-Flight.

The first retention board met in May 1949 to consider those commissioned in 1948. 286 of this group applied for retention [Ed: I don't recall requiring application for retention. We all assumed we were USN for life--as the original pitch to us at Ottumwa promised]. The board originally selected 284 for retention.

(The unofficial word was that the two non-selectees had both been reported for flat-hatting.) However, just before the results were released, Louis Johnson, then SecDef, was enforcing big cutbacks and the board was instructed to reconvene and cut the selection 50%. The result was 142 were selected for retention. All non-selectees were given a reserve commission and released to inactive duty by June 30, 1949 [sic: December 30, 1949].. This was a big shock to those commissioned in the latter part of 1948. They were on active duty as a commissioned officer for less than a year, some just over six months, if they were commissioned in December 1948..

Those commissioned in 1949, saw the handwriting on the wall. In fact, the word was out that there would be a 10% selection rate. 379 applied for retention and 37 were selected. The non-selectees were to be released on June 30, 1950. But Korea broke out just six days before, and some were given the opportunity to remain on active duty as reserve officers.

When the retention board met in May 1951 to consider the officers commissioned in 1950, Korea was still going strong and the retention rate was 90 to 95%.

In 1951 it was recognized the groups commissioned in 1949 did not have much of an opportunity. The Navy gave them an opportunity to reapply for the regular Navy. [Ed.: In early 1953, I submitted a letter requesting retention; after a time, the reply: “It’s too early. Submit your application later.”]

Approximately 300 applied and 100 were selected for regular Navy.