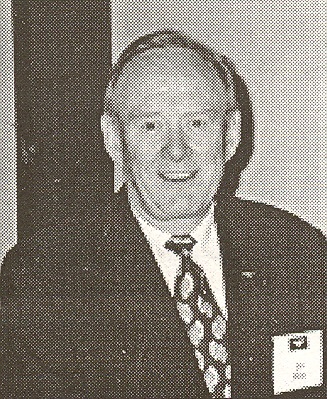 Jim Morin developed a bond with the men he led in combat 35 years ago that has never weakened or been doubted by his fellow pilots. A good example of this strong bond was on display six weeks ago at the National Museum of Naval Aviation in Pensacola, Fla.

Morin was commanding officer of VA 155, the Silver Fox­es, in 1965 and 1966. During that period of time the unit flew combat missions over North Vietnam for almost 10 months. This was an extended tour of hot combat assignments flown from the flight deck of the Coral Sea.

What started out as a seven-month tour of duty was extended to an 11-month cruise. Each of the pilots had already flown their A-4 Skyhawks in 100 combat missions. Now they faced even more missions and more deadly fire, including surface-to-air missiles, thrown up by the enemy. It was a long four months.

Morin, a commander during this time, went on to earn the two stars of a Rear Admiral. Never was he to forget the bravery and flying skills of the Silver Foxes. Despite their heroism and accomplish­ments in combat, the award recommendations for many of the pilots were sidetracked. Other peo­ple might have forgotten, but not Morin who continued to hound the brass sitting in the Pentagon.

Late in May, 22 new flight officers lined up to receive their pilot's wings in Pensacola. Then 10 of the Silver Foxes were surprised and called forward to receive the Distinguished Flying Cross or a gold star to recognize their second award of the decoration. The gutty retired RADM James B. Mor­in had won a battle he took on 35 years ago.

Among the recipients of the DFC was Bill Kish who now is Northwest Airlines captain of a 747. When asked about Morin, he told me, "There has never been a finer combat leader." Another former squadron pilot, Jim Warnke, a retired airline pilot was quick to add his praise of Morin as a gentleman and leader.

Morin, when writing about Kish, called him an "excellent stick and throttle man and an accurate bomber pilot. He was dependable, reliable, with the ability to lighten up a serious situation to help us get through it."

The retired admiral went on to recall, "And it was about this time, that Coral Sea had launched its 10,000th mission of the cruise. Bill Kish was the honoree, and on recovery was ordered to report to Captain Cassell on the bridge. 'Son, is there anything you want?' the Captain asked. 'Yes sir,' Bill replied, 'send me home to sell War Bonds.'''

The citation for Kish's DFC reads in part: "LTjg Kish was involved in numerous major air strikes against bridges, power stations, military facilities and fuel depots in the Red River Delta, an area of the most intense air defenses, including surface to air missiles. He also flew day and night road re­connaissance missions to slow the flow of supplies from North Vietnam to South Vietnam, attack­ing choke points at bridges and rivers where the enemy was quick to strengthen its defenses. He un­flinchingly pressed home his attacks in the face of a determined and resolute foe. The strain of dai­ly combat operations for periods of four to five weeks over an extended deployment never kept him from performing his duty as a naval officer and naval aviator.

It took 35 years, but Jim Morin, a strong combat leader with undying loyalty to his, finally brought a bit of justice for those who flew into danger with him.