Glad that you made it through Isabel [hurricane]. We have been lucky so far this year down here on the peninsula. I enjoyed your initial “BROWN SHOES” effort and would like to purchase the book. My story follows:

Like so many others of my era I was enamored with airplanes and spent many hours building model airplanes and inadvertently sniffing model glue and wondering why I felt funny. I read as many stories as possible and especially enjoyed World War I pulp magazine stories. Although not about flying I am sure that many future aviators also enjoyed the adventure stories about “The Man of Bronze” and his co-harts.

One of my most thrilling experiences was around 1936 when I heard a backfiring airplane coming over my house and ran into the yard to see a Ford Tri-motor make a landing in a cow pasture across the road. I do not remember whether I had seen an airplane on the ground before but this one was HUGE and you could walk around inside it. They had some type of problem that caused them to make an emergency landing and were on the ground for a couple of days. When they were ready for departure a couple of fences had to be taken down in order to give them room for take-off. This really whetted my appetite for flying and when I could talk my father into it I visited the small airfield in my home town.

As I grew into my teens I played sports, against my Mother’s wishes in the case of football, and talked my Father into approving my joining the Civil Air Patrol. There were two brothers of Norwegian extraction running our airport at that time and I flew with one of them (Rolf) whenever I had the chance. Most of my flight time was in Piper Cubs but Rolf took me up one time in an open cockpit Stearman to introduce me to aerobatics. It was winter time and coming out of a loop I was hunkered down in the cockpit to get out of the wind. When we leveled out Rolf checked and could not see me and thought I had fallen out. This ended the day’s lessons and I got an earful when we got back on the ground.

Just before High School graduation in 1946, with the draft still in effect, I heard about some Navy flying programs and went to Atlanta, GA. To take the physical and written exams. Before I learned whether I had been accepted I also had the draft pre-induction physical and was sweating this out when I finally learned that I had been accepted into the Holloway (V-5) Program. I entered college that fall and by staying in school during the summer I was able to finish two years and reported to Pre-Flight in Pensacola in May of 1948. After a short delay I was discharged and sworn in as a Midshipman, USN. Other than some serious swimming problems Pre-Flight was fine and I went to Whiting Field to begin basic flight training. There were some funding delays and I did ground-loop a SNJ but I finally made my six carrier landings and reported to Corpus Christi in the fall of 1949 for advanced training in multi-engine aircraft (PB4Y-2). I received my wings of gold in Feb. 1950 and received orders to a Patrol Squadron in Jacksonville, Fla. Reporting in as a Midshipman in March of 1950. I received my commission as an Ensign USN in June of 1950.

The Patrol Squadrons were overloaded with young pilots and a number of us were transferred to VR squadrons in December. In my short time at Jacksonville I had met a beautiful young lady and we were married just prior to my leaving for what turned out to be a tour of duty in Honolulu, T.H. She joined me in Feb., 1951 and although I was gone on trips to the Philippines and Japan most of the time, it turned out to be a good tour of duty. During the confusion of transferring I had forgotten to reapply for permanent USN as called for in my Midshipman contract and was changed to USNR. It was fortunate that I was in VR since we were busy supporting the Korean War and I did not get released from active duty as many pilots did. I stayed in VR for most of my career flying both Pacific and Atlantic routes. Although we eventually were blessed with three children I had been married for seven years before my first Christmas at home with my wife and children. I was able to see much of the world and accumulate many hours of flying time.

After eleven years in VR I applied for TAR (Training and Administration of Reserves) and finished up twenty-four years of active duty in 1972 retiring as Captain USNR. Except for a few engine failures my flying years were pretty uneventful. I was blessed by the Holloway Plan and the Navy was a great career. My second career was with a public school system in Jacksonville, Fl. Where I was first commissioned. I still have a pair of brown flying boots. 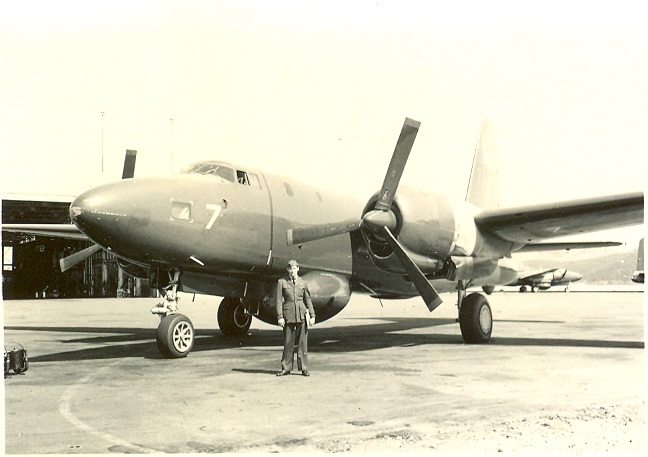 Finishing ‘at tour, I went out to Oklahoma with MATS Training Command, and finished a tour there, and then went on recruiting duty.

Finished up my career at Jacksonville, again, at the Naval Air Training Center. After 26 years. Retired as an O-6 [Captain].